Mortgage rates remained flat this week, likely due to a lack of construction activity, according to Freddie Mac’s latest Primary Mortgage Market survey.

“Manufacturing output and consumer spending showed improvements, but construction activity was a disappointment,” Khater said. “This meant there was no driving force to move mortgage rates in any meaningful way, which has been the theme in the last two months. That’s good news for price sensitive home shoppers, given that this stability in borrowing costs allows them a little extra time to find the right home.”

“Unfortunately, don’t expect much relief from the tight inventory conditions plaguing many markets,” Khater added. “As seen again last month, new home construction is not picking up to meet demand, and as a result, home prices are still rising at double the pace of income growth.” 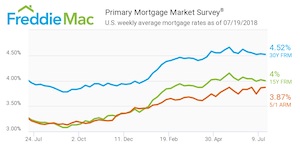 The five-year Treasury-indexed hybrid adjustable-rate mortgage averaged 3.87% for this week, up from 3.86% last week, and up from this time last year when it was 3.21%.

We have a precedent for how housing crashes happen. We just need to look back to 2008 when we had over 10 million delinquent loans. But none of these factors exist in the market now.

Knock Home Swap has expanded into Orlando, Florida and Tampa, Florida, its inaugural markets in the Sunshine State.