We’ve known that the rent may be too damn high for quite a while now, but a new report shows that rent has never been this high before.

Newly released data from RentCafé and Yardi Matrix shows that nationwide rents just hit an all-time high in June, crossing the $1,400 threshold for the first time ever.

In terms of dollar amount, apartment renters now must fork over $40 more per month than they did one year ago. 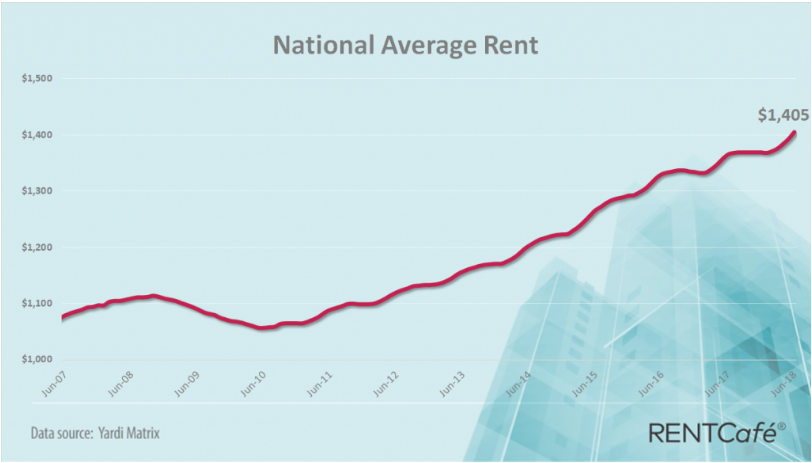 (Click to enlarge. Image courtesy of RentCafé and Yardi Matrix.)

None of the rental mega-markets of the country escaped steep rent increases this month. Orlando took 1st place by proportional increase as well as dollar-value, where renters now pay 8.4% or $107 more compared to last June. Tampa, Phoenix and Las Vegas apartments also cost 6-7% more than a year ago. Las Vegas has also reached the $1,000 milestone since last year, same as Jacksonville and San Antonio.

One area hit hard by a June rent increase was Manhattan, which has long been the most expensive rental market in the country.

According to the report, apartment rents in Manhattan have actually been dropping, stagnating, or very sluggishly growing over the last few months.

But that all changed in June, when rent rose to an average of $4,116, an increase of 1.5% or $60 per month, representing the largest increase in a year.

Again from the report:

With renting gaining popularity among families, two- and three-bedroom units were the main drivers of rent growth so far in 2018. June’s increases, however, were almost perfectly balanced among unit types as the demand for studio and one-bedroom units caught up and even outpaced the two-bedroom segment. Three-bedroom homes cost 0.8% more compared to a month prior, $1,714. Two-bed units have seen a somewhat bigger month-over-month increase (although they lagged behind the other categories in yearly comparison), 0.9% to $1,489. Meanwhile, one-bedroom apartments and studios have seen their rents rise by a full percent, to $1,271 and $1,239, respectively.

Doug Ressler, director of business intelligence at Yardi Matrix, believes that the increases are driven by increasing demand for rental housing for a myriad number of reasons.