As the Federal Reserve prepares to announce the results of the annual stress tests for banks in June, one expert is already predicting banks will pass.

Last year, for the second year in a row, all of the nation’s largest financial institutions passed their stress tests, meaning each company has enough capital on hand to survive a "severe recession."

This year, 38 of the nation’s largest financial institutions, instead of 34, will be evaluated. These include the largest banks in the U.S. and several foreign-owned banks.

Now, Trepp, a provider of data, analytics, and technology solutions to the global securities and investment management industries, is predicting most, if not all, banks will past this year’s test, despite the harsher test.

“While this year’s Severely Adverse scenario is somewhat harsher than last year’s, aggregate loan losses will climb modestly,” the company said in a report. “With loss estimates largely in line with last year’s, we expect a majority of the CCAR banks to receive approvals to increase dividends to shareholders.”

The company predicted most banks will receive permission to increase their dividends, although the increases may not be as large as last year.

Trepp predicted credit losses in the severely adverse scenario will increase from last year by about $12.3 billion, with about 60% of the higher losses coming from the new additions to the list of banks being tested.

The major sources of losses in a major downturn would occur in unsecured business lending and credit cards, a result of banks’ large holdings in these areas and the severity of recession impacts on these loan types.

As far as both commercial and residential mortgage loans go, however, Trepp predicted they will fare much better. But commercial real estate loan loss could outpace last year’s as the test this year will assume a sharper decline in CRE prices.

The chart below shows which loan types Trepp predicts will drive losses in this year’s stress tests. Residential loans remain flat from 2017, and commercial real estate loans will increase only slightly, according to the estimates. 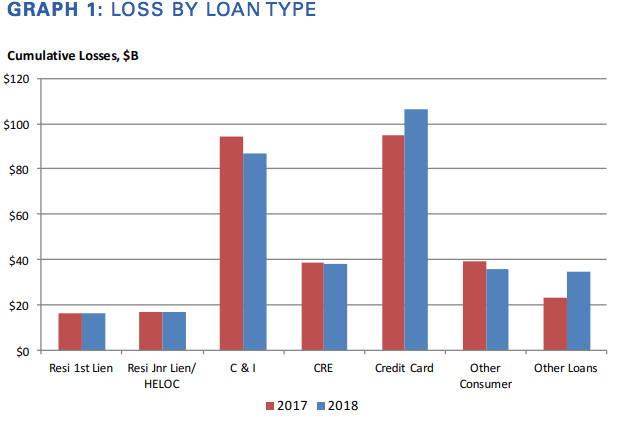 The Fed will release the official results later this month.