Most researchers and economists say construction is slowing and will continue to slow. The odd thing is that the number of multifamily building permits does not reflect that sentiment, jumping 19% in March, according to Capital Economics’ monthly housing report.

There is no apparent reason for this spike as developers and multifamily investors seemingly would like to maintain the currently stable rent growth of 1.5%. Capital Economics’ explanation for this confounding data is that permit data is very volatile, and that logic does not support sustained increases in construction.

Vacancy is low, rent growth is stable, supply and demand appear to be in equilibrium and developers want to keep it that way, so more likely than not, these wild permit numbers will not hold for very long. 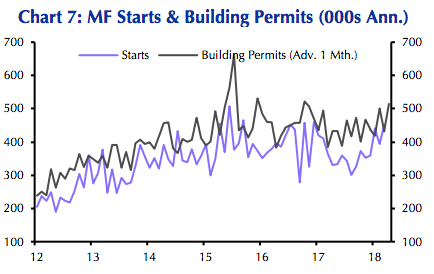 According to a Fannie Mae survey cited in the Capital Economics report, the multifamily market is expected to receive a record high, 5.7% increase in rents over the course of 2018. Zillow’s rent growth index reveals Nevada, Vermont, Georgia, and Delaware as the states exhibiting the fastest rent growth while Wyoming, Arkansas, Louisiana, West Virginia and Alaska exhibit the slowest rent growth.

After a banner year in 2017, most experts are expecting the pipeline to taper to maintain equilibrium. The number of units under construction has leveled at around 600,000 units as the market continues to stabilize after 2017’s record activity according to a report from Capital Economics.

The multifamily market is showing signs of cooling as this is the fourth consecutive quarter where the number of rental unit households decreased, slipping slightly to 43 million this quarter. No one seems particularly worried about this cooling as the market is still performing well above historical averages. (See the graph below) 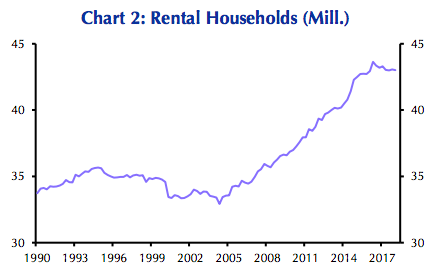 By all indications, the multifamily market is now a sellers’ market, and new product will not be delivering en force for much longer, or else rent growth will halt and reverse. It is highly unlikely developers will allow this to happen.

Anthony Hsieh, the CEO of loanDepot, has been buying some pricey real estate in Florida, pushing his property portfolio to over $150 million.