Tuesday, the U.S. Department of the Treasury released a 21-page report entitled Regulatory Reform Accomplishments Under President Trump’s Executive Orders, which, as the title suggests, details the actions it has taken toward decreasing regulations.

“Regulatory reform is a key component of the president’s plan to make American businesses more competitive and create opportunities for hardworking Americans,” Treasury Secretary Steven Mnuchin said. “I’m proud of the diligent work we have done at Treasury to ensure that we have an effective and efficient regulatory system.”

“We will continue to ensure that we identify and reduce outdated regulations,” Mnuchin said. “Reducing unnecessary burdens will lead to increased economic growth, greater job creation, and a fundamentally stronger economy for our country.”

The chart below shows the actions the Treasury has taken on regulatory reform, including more than 250 specific Treasury recommendations to “reform and reduce burdens of financial regulation.” 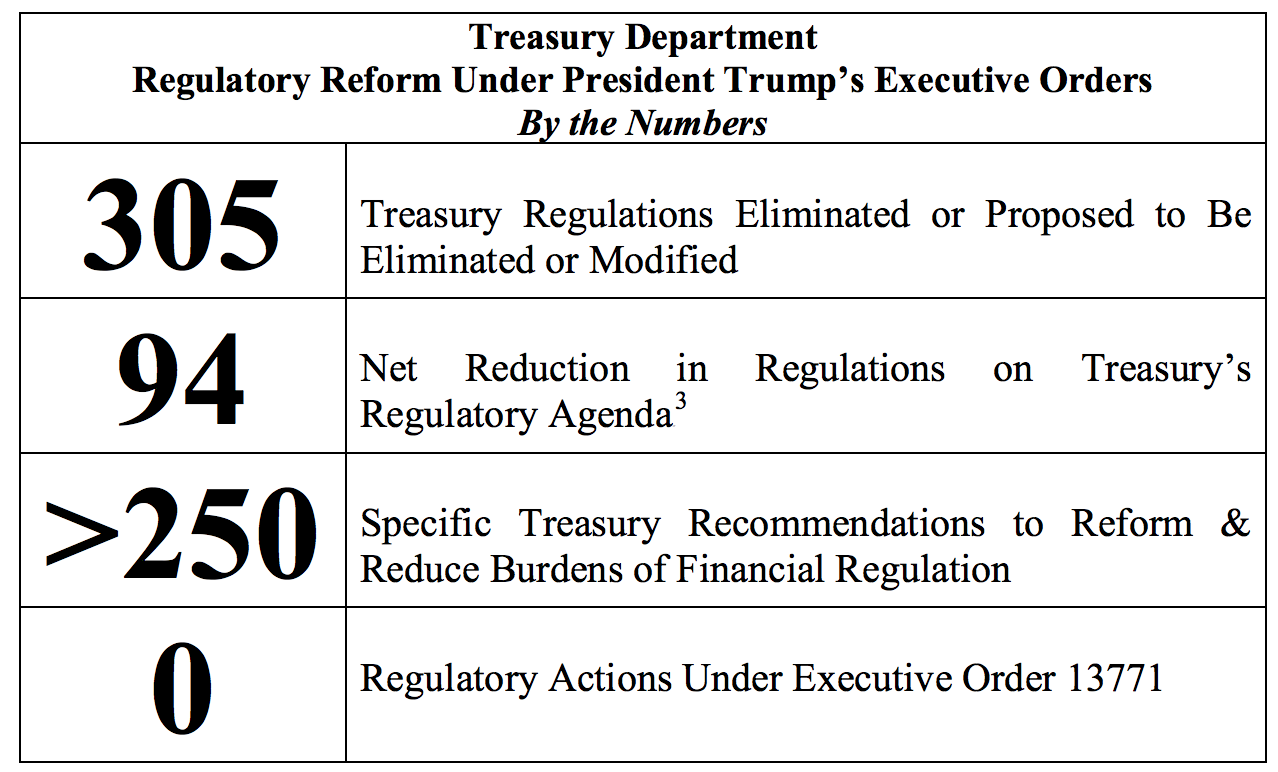 President Donald Trump took several executive actions at the beginning of his administration to establish regulatory reform as one of his main policy priority. On January 30, 2017, the president issued Executive Order 13771, “Reducing Regulation and Controlling Regulatory Costs.” This order declares that for every new significant regulation issued, at least two prior regulations, sufficient to offset the incremental cost of the new regulation, be identified for elimination.

The Treasury focused a large portion of its focus on the finance industry, preparing a number of reports with recommendations addressing financial regulation, the report states.

Some of the actions the Treasury took regarding the finance industry include:

Banks and credit unions report: Back in June, the Treasury released a report detailing how capital, liquidity and leverage rules can be simplified to increase credit flow. Some of the report’s recommendations included raising the threshold for enhanced prudential standards and better tailoring regulations to a bank's complexity and risk; making the Consumer Financial Protection Bureau more accountable to Congress; reducing the overall regulatory burden for community banks; and making greater use of cost-benefit analysis in financial regulation.

Capital markets report: In October, this report explained how to streamline and reform the regulatory system for capital markets, according to the Treasury. The report claimed some ways to reduce the burden on companies looking to go public or stay public including tailoring and streamlining disclosure requirements according to company size; incorporating more robust economic analysis and public input into the rulemaking process; limiting imposing new regulations through informal guidance rather than notice and comment rulemaking and many more suggestions.

CFPB arbitration rule report: In July, the CFPB issued its final rule prohibiting consumers and providers of certain financial products and services from agreeing to resolve future disputes through arbitration rather than class-action litigation. Later, the Treasury determined that the CFPB failed to consider the share of class actions that lack merit, as well as the benefits of arbitration and regulatory alternatives potentially available to it.

Since issuing its reports, the here are some of the actions that have been taken based on the Treasury’s recommendations.

Volcker Rule request for information: In August, the Office of the Comptroller of the Currency published a notice soliciting public input on how the regulations implementing the Volcker Rule could be revised.

Current pending legislation: This includes the Economic Growth and Regulator Relief and Consumer Protection Act, which passed in the Senate.

Arbitration Rule: The Senate passed and the president signed a Congressional Review Act resolutions which nullified the rule.

Home Mortgage Disclosure Act: In December, the CFPB announced that it will provide additional flexibility for small lenders and that it intends to engage in a rulemaking to reconsider various aspects of the 2015 HMDA rule such as the institutional and transactional coverage tests and the rule's discretionary data points.