When the last economic boom came to a crashing halt, the next phase of mortgage disruption began. In 2007, the big banks, along with several now-vanished names, such as Countrywide and Wachovia, dominated the easiest mortgage credit environment the nation ever witnessed. When this lending came to a halt, in the face of record defaults, the weaker lenders were folded into the too-big-to-fails and the looming regulatory fixes and vicious press headlines meant the survivors ran for the nearest holes they could find.

While those big banks are slowly reemerging from hiding and beginning to lend again, there are new settlers on the horizon, and they’ve built some rather large villages on the ashes of subprime’s foundation.

How is such a high level of disruption possible? The mortgages in the nonbank versus big bank world are largely very similar these days: high-credit borrowers, low levels of defaults, prudent underwriting. Further, nonbank mortgages these days aren’t even cheaper to originate. On paper, this universe looks fairly flat.

So what gives? The aforementioned gap in the market is key, as there was ample room to grow for those firms which were not specifically impacted by Dodd-Frank but still maintained access to the vast, federal mortgage financing structure, primarily FHA insurance, but also Fannie Mae and Freddie Mac.

But these two factors — private markets and then government control — are not enough to merit such an extensive reworking of a multi-trillion-dollar a year industry.

What was the main source of fuel for the bonfire? Nonbanks extensively invested in mortgage fintech R&D.

From the NBER report: “We recall that the shadow bank market share in conforming mortgage market grew by more than 33 percentage points in 2007 to 2015 period. Of this increase, about 11.7 percentage points are attributable to the growth in fintech firms.”

So how did these nonbank lenders, whom the above researchers refer to as “shadow banks,” in reference to their ability to avoid a higher level of regulatory oversight, manage to disrupt the mortgage market?

The authors write: “there has been significant geographical heterogeneity in bank capital ratios, regulator enforcement actions, and lawsuits arising from mortgage lending during the financial crisis, and we show that shadow banks are significantly more likely to enter in those markets where banks have faced the most regulatory constraints.”

Translation: the nonbanks can use mortgage tech to penetrate markets where there is no trouble on the horizon. Is Las Vegas less litigious? Quicken has you covered. Is it more profitable to lend in Pittsburgh? loanDepot has the right mortgage for you.

And here’s how they do it.

From the conclusion of the NBER study:

“Fintech lenders, for which the origination process takes place nearly entirely online, have grown from roughly 4% market share in 2007 to 13% market share in 2015, and represent a significant fraction of shadow bank market share growth. By comparing lenders fintech and non-fintech shadow banks, we compare lenders who face similar regulatory regimes, thus isolating the role of technology.

"First, we find some evidence that fintech lenders appear to use different models (and possibly data) to set interest rates. Second, the ease of online origination appears to allow fintech lenders to charge higher rates, particularly among the lowest-risk, and presumably least price sensitive and most time sensitive borrowers.”

On August 8, at a conference held by the California Mortgage Bankers Association in San Diego, I was honored to sit on a mortgage tech panel with Adam Stein, CEO of LoanTek, and Daren Blomquist, senior vice president of ATTOM Data Solutions.

Here are three things digital disrupters should be focused on doing, Stein’s words are in quotes:

1. Delivering digital trust and ease of use are key requirements across all demographics.

“Consumers of all ages require ease of access that mirrors their consumption on other common sites. For a digital conversion to be a success, a lender’s site needs to convey trust, clearly demonstrate the terms of the offer, while systemically automating and streamlining the delivery of the consumer’s request for financing.”

2. It is essential to have a digital plan that contemplates the company’s existing relationships and the usage requirements of staff.

“A successful digital conversion provides technology that adds to the company’s capacity by making loan officers and their referral partners more efficient. Being cognizant of matching the business’ technology needs to the usage requirements of the company’s available human capital is a huge step in avoiding unnecessary expense and implementation failure.”

“Today, lenders are confronted by a myriad of technological solutions and options.  The selection, or combination of the same, is dependent upon the extent to which a lender chooses to delve into digital origination. It is essential, therefore, to look forward, and scope the requirements so as to identify critical processes (must-haves) and distinguish those elements from others that are lesser, but desired, features. Having a clear understanding of the end result, APIs, and the connectivity of the platforms one intends to use, are essential to a successful end result.”

For the smaller players, following the above format Stein describes won’t automatically lead them down the yellow brick road. It’s a start, yes, but it won’t gain you an audience with the wizard just yet. There are flying monkeys along the way and those roles are being filled  by the former bad actors. That’s right: The big banks are fighting hard to get back onto the main stage.

In a letter to shareholders in April 2016, the CEO of JPMorgan Chase, Jamie Dimon, said the only reason the bank still originated mortgages was for the sake of its customers.

“The mortgage business can be volatile and has experienced increasingly lower returns as new regulations add both sizable costs and higher capital requirements,” Dimon wrote.

“In addition, it is not just the cost of the new rules in origination and servicing, it is the enormous complexity of those new requirements that can lead to problems and errors,” Dimon continued. “It is now virtually impossible not to make some mistakes – and as you know, the price for making an error is very high.”

Dimon added that for most of the bank’s customers, the home is the single largest purchase they will make in their lifetime.

“More than that, it is an emotional purchase – it is where they are getting their start, raising a family or maybe spending their retirement years,” Dimon said. “As a bank that wants to build lifelong relationships with its customers, we want to be there for them at life’s most critical junctures.”

Dimon is hardly the first CEO to lay the customer-first ethos on the altar of its main loss-leading asset class. But he hit on several important points, when reading between the lines. The first is that the bank will never be able to not offer mortgages and maintain a high level of competitiveness. So, never count them out. Second, a business needs to spend money to make money, and mortgages are a margin business. 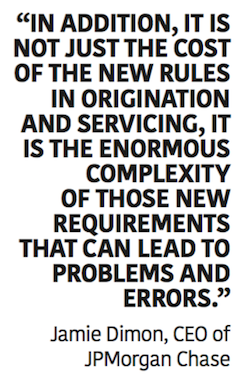 Therefore, what can get costs down the most, considering regulatory scrutiny is an ever-moving target? That’s right, increased digital efficiency.

Dimon also added, at the end of the letter, that JPMorgan Chase is planning the rollout of a new originations system, and said that the bank will be going more digital with its mortgage operations.

“We will continue to leverage digital channels to make the application process easier for our customers and more efficient for us,” Dimon said. But a digital disruption needs to keep an expansive mind. In late July 2017, JPM announced a partnership with PayPal for customers to have the ability to enhance digital wallet purchases. That helps with online purchases and next up could be a retail-level purchase innovation, not unlike Android Pay or Google Wallet. The point is the ability to move all financial operations from someone’s bank account and onto their phone is the end game here.

So what is the best strategy for winning against the heavy hitters?

John Paasonen, co-founder and CEO at mortgage software provider and HousingWire Tech100 winner Maxwell, knows a thing or two about the move to actualize the digital wallet economy. Before he designed tailored solutions for mortgage lenders, he worked global strategy at PayPal and directed premium brands at American Express.

And with such insight into how the advancement of digital wallet tech disrupted the payments processing world, he has a solution for how to be disruptive, along with Stein’s advice, for mortgage lenders.

“Most lenders realize that a web form with 300 fields is going to be a nonstarter, especially if it doesn’t work on mobile,” he said. “Large banks are investing in tech heavily to regain mortgage margins. For some of the smaller, independent lenders, the workflow process remains outdated.”

But creating a user-friendly environment online (something he helps with) isn’t going to be enough. Lenders need to understand — and this goes back to what Dimon referred to — that homebuyers still need contact with actual humans before signing for a 30-year loan.

“Our thesis is humans can be more efficient originating mortgages if they’re powered by modern software,” he added. “Homebuyers want a human guide to help them through the mortgage process, so let’s help the LOs become those advisers and not spend so much time pushing paper.”

As the conference wound down in California, an earlier panel of mortgage tech vendors discussed what holds mortgage bankers back from fully embracing technology. Leaders from solutions providers such as OrangeGrid, Velocify and BeSmartee painted a picture of borrowers who are more skeptical and actually less savvy than they think. Therefore, brilliant mortgage tech, which would help guide their decisions, is a must for gaining market share.

Later, as I took the stage with Stein and Blomquist and we painted a picture of the overall mortgage industry, the 30 or so originators in the audience remained engaged. Once we explained the clear benefits of tech, Stein presented a question to those lenders: “Show of hands; Who among you has a digital-only mortgage?”

No one in the audience, attending a tech conference, raised their hands.

To which I presented: “Now that we’ve shown the threat of Silicon Valley and the return of big banks to the market, who among you is considering implementing a digital mortgage?” After a few seconds, a single member of the audience slowly raised his hand.

Progress for the mortgage industry, it seems, continues with baby steps.

PROFILE OF A MORTGAGE TECH DISRUPTER 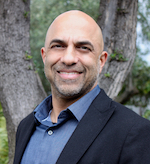 “Companies that provide field services to the mortgage industry run on razor-slim margins and need the efficiencies of an automated workflow system to maximize profits,” Shah explained to HousingWire.

“They also need systems to meet their client’s strict vendor compliance and field reporting requirements in order to get paid.  Mobile applications with smart forms, GPS and timestamped photos provide validation and documentation of that vendors completed the work (grass cuts, lock changes, inspections), as required and ensures everyone gets paid.

"FotoNotes’ mobile-optimized field services management technology provides these critical benefits to our clients and their vendors.”

Fotonotes is less than ten years old, operations with relatively few staffers, and doesn’t provide a service exclusively to mortgage clients. They are young, fast and expansive. And while Fotonotes may not threaten most mortgage finance businesses its important to note that those that may — larger players such as Costco, Google and Amazon — have tipped their toes in the mortgage waters.

Is investor appetite for non-QM changing?