Wednesday, the U.S. Department of Housing and Urban Development and the U.S. Census Bureau issued a joint report which showed housing starts decreased in July – and economists are not happy with the numbers.

“The disappointing news for homebuyers is not that multifamily starts are down, but rather that single family has barely nudged up much in the past few months,” Trulia Chief Economist Ralph McLaughlin said. “With homeownership on the rise for young households, we need more one-to-four unit construction to help keep up with demand.”

The chart below shows housing construction, while trending upward, is still far below its historical norm. 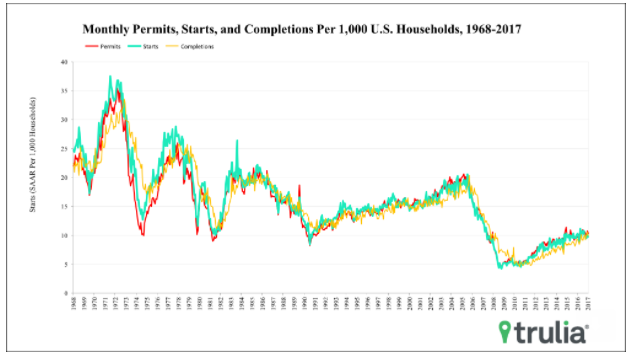 Another economist pointed out the housing market isn’t the only market at risk from the declining housing inventory.

“Moreover, the latest 15% drop in multifamily housing starts and 0.5% drop in single family starts will hold back economic growth potential,” NAR Chief Economist Lawrence Yun said. “Because of this continued shortage, expect rents and home prices to rise by at least twice as fast as the broad consumer price index.”

But why are housing starts so low, despite the increasing demand? First American Financial Corp.’s chief economist explained.

“Despite the monthly volatility, we continue to see gradual growth in starts of single family homes on a year-over-year basis,” said Bill Banfield, Quicken Loans executive vice president. “This steady increase is a sign of a stabilizing market and gives optimism that the economy can continue to support more homeownership.”

Another expert agreed, pointing out that while the decrease may seem disappointing, it does have positive points.

“With June starts generating optimism after halting three straight months of declines, the July data is disappointing and may indicate that full year projections of 1.25 million to 1.3 million starts may be optimistic,” PwC Principal Scott Volling said. “However, we see two reasons to maintain some level of optimism.”