Despite a slight increase in July, the default rate for first mortgage loans still sits at its lowest point in the last 10 years, according to the latest S&P/Experian Consumer Credit Default Indices.

In fact, the mortgage default rate for first and second mortgages aren’t too far off from their July 2016 level, as homebuyers get better at paying their mortgage on time.

The indices represent a comprehensive measure of changes in consumer credit defaults and include bank card and auto loan default rates.

As seen in the chart below, the first mortgage default rate increased two basis points from June to 0.62%.

This second chart gives a broader picture and shows the changes in default rates over the last ten years. 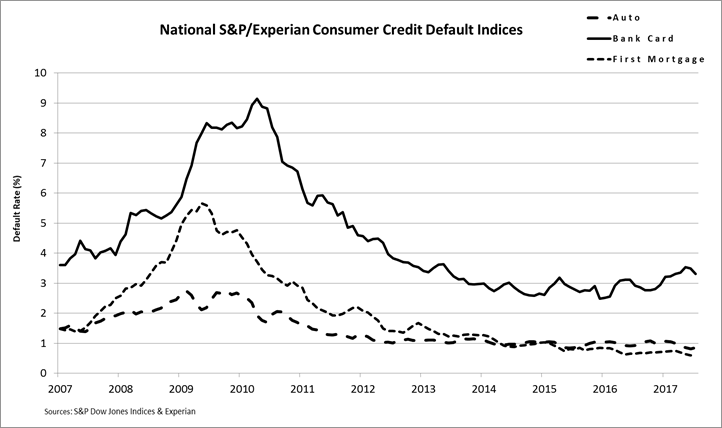 “Default rates for autos and first mortgage loans are at their lowest points in the last ten years, while bank card defaults remain modest,” says David Blitzer, managing director and chairman of the index committee at S&P Dow Jones Indices.”

“Consumers’ use of credit is growing and the level of consumer credit outstanding is at an all-time high. In the year ending June 2017, consumer credit outstanding rose 5.7%, outpacing most spending categories across the economy,” he said. “However, retail sales excluding autos as well as auto sales are down slightly since April, while home sales are little changed in recent months.