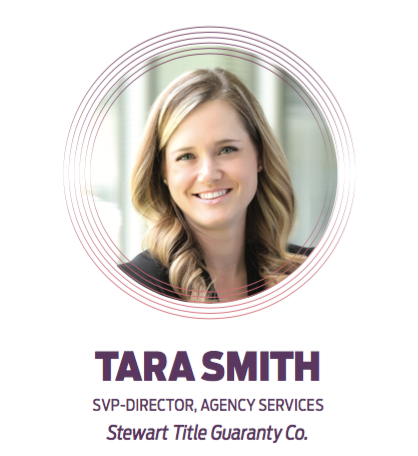 Tara Smith leads strategy development and implementation for Stewart Agency operations, and provides guidance to other leaders across the title industry – resulting in improved financial performance in 2017.

During the past year, she spearheaded five new technology integrations that have increased the resources available to independent agents in Stewart’s Trusted Provider network and increased top-line growth – all while expanding the title industry’s position in the technological space.

Smith is also responsible for oversight of three of Stewart’s business units, including Stewart Vacation Ownership, Stewart Financial Services and the funding and escrow services department for large lender-transactions, all of which have seen increased productivity and customer service since she took over in January 2016.

Smith is passionate about building the next generation of leaders in the title insurance industry. She actively mentors those on her team and in the company, enabling them to achieve goals and take a forward-thinking approach.

She also has a strong track record of advising executives and other industry decision-makers on strategy, business development and financial performance issues, and is recognized as a champion in leading industry-wide change related to title, escrow and underwriting. During her time with Stewart, she has been a passionate advocate for leading the company into the digital era and pioneering new initiatives designed to decrease cost and maximize efficiency, both for Stewart and the thousands of independent agents in its network.