Housing starts suddenly rebounded from May’s drop as residential construction picked up its pace in June.

Privately owned housing starts increased to a seasonally adjusted rate of 1.22 million in June, according to the latest report from the U.S. Census Bureau and the U.S. Department of Housing and Urban Development. This is up 8.3% from May’s 1.12 million and up 1.2% from last year’s 1.19 million.

Of those, single-family housing starts increased 6.3% to 849,000 homes, up from 799,000 in May. The chart below shows the increase in the total number of housing starts. 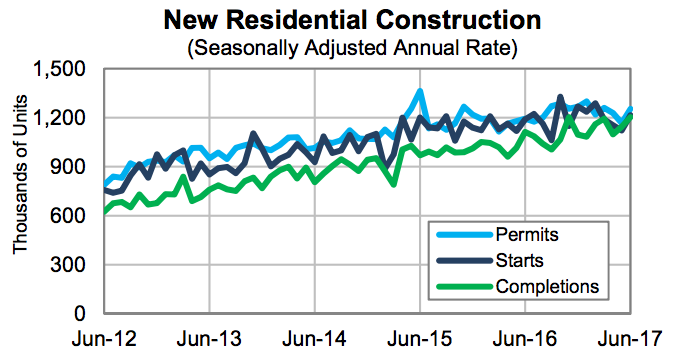 An increase in building permits shows this sudden increase is likely to continue next month. Privately owned housing units authorized by building permits increased to a seasonally adjusted annual rate of 1.25 million. This is up 7.4% from 1.17 million in May and up 5.1% from 1.19 million last year.

However, this monthly increase was due mainly to an increase in commercial housing as single-family housing completions increased just 0.4% from May’s 795,000 to 798,000 in June.

The rebound in new housing construction came despite the recently announced lower builder confidence, which slipped due to concerns over rising material costs, according to the latest National Association of Builders and Wells Fargo Housing Market Index.