This time last year, Fifth Third Mortgage revealed its exclusive Down Payment Assistance Program that offered 3% of the purchase price in down payment assistance, leaving the borrower to put zero down on the home.

Since no-down mortgage programs are still hard to come by, HousingWire reconnected with Fifth Third for an update on the program to see how it has performed.

At the time, the concept of a low-down mortgage was met with a lot of skepticism (actually it still is — see comments here). Shortly before Fifth Third announced the no-down program, both Quicken Loans and Guaranteed Rate announced 1% down programs, and before that, a whole crowed of lenders released 3% down mortgage options. But, no-money-down mortgage programs were still pretty rare.

Similar to others in the space, Fifth Third’s program paired with Freddie Mac’s Home Possible Advantage Mortgage, a product with a 3% down payment and reduced mortgage insurance premiums.

There are some important caveats in Fifth Third's program however. While borrowers don’t need to be first-time buyers, Fifth Third’s fine print states that borrowers must be “either located in a Low Income Census Tract or borrower must meet the low income limit threshold based on the qualifying income per FFIEC website.”

And the program is only available in the bank’s 10-state footprint, which includes Michigan, Indiana, Illinois, Kentucky, Tennessee, Ohio, West Virginia, North Carolina, Georgia and Florida.

Now a year into the program, Fifth Third Mortgage President Ed Robinson gave HousingWire a progress report on how the program is performing.

“We have a real mix now of buyers who qualify for Fifth Third’s Down Payment Assistance Program. We have a lot of buyers who are low-income and many who are buying in low-income areas, both of which qualify for the program. We’ve seen Millennials as well as seniors on fixed incomes take advantage of this product. We’re excited to be able to help people become educated homebuyers,” Robinson said.

Robinson explained that there is still demand for the product, which is part of Fifth Third’s $30 billion Our Down Payment Assistance Program. The progam is slated to continue over the next four years.

“For so many people, a down payment is the biggest obstacle to buying a home. We know that most Millennials have less than $1,000 in savings for a down payment. And that the majority of them are unaware of low-down-payment programs," he said.

"And the trend is similar for our low- to moderate-income households: the down payment is the biggest obstacle to buying a home,” he explained. “So while we see that this is an obstacle and we know people need it, people don’t always know that programs such as Fifth Third’s Down Payment Assistance program exist.”

He stated that the lender is working with communities to spread the word about the program, including working with 145 community organizations across its footprint.

“In many of our communities we are hosting Owning It, a home-buying seminar to walk potential buyers through the process, from helping them create a budget to save for a house that meets their financial and family needs to better understanding the buying and closing process,” said Robinson. We want to help people become educated homebuyers and be their partners through the process.”

For lenders that are still very skeptical toward low-down mortgages, he said that that the down payment assistance program is the key to helping many people become homebuyers.

“For us, it’s important to provide financial education to our homebuyers so that they understand the process and are buying a house that best meets their family’s goals, both financial and personal,” said Robinson.

Recently, other companies have jumped on the low-down bandwagon, although it’s still only a handful. At the beginning of June, Movement Mortgage announced a new down-payment assistance program for first-time homebuyers that allows borrowers to put nothing down on a home.

And similar to Fifth Third’s program, which allows homebuyers to put 0% down but still have equity, Movement Mortgage said it would provide grants up to 3% of a home's sales price.

Shortly thereafter, Land Home Financial Services announced it was rolling out a zero down payment mortgage. Land Home’s program isn’t solely a zero down payment mortgage though. The program, called House2Home, is a “suite of down-payment assistance and educational programs aimed at helping prospective first-time and repeat homebuyers achieve the dream of homeownership.”

But these two options did not come out until nearly a year after Fifth Third, showing the market is still hesitant to create such low down programs. It's this same uncertainty that in the past spurred HousingWire to host webinars such as “The secret to closing more 3% down mortgages,” where we worked with Freddie Mac.

And according to feedback on Fifth Third’s low-down program, borrowers definitely appreciate the program. 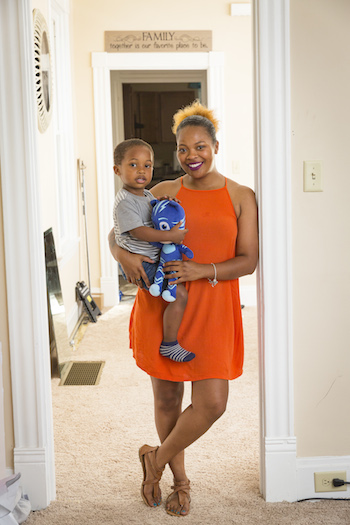 “I really liked this program because it didn’t limit me. There were some great programs, but they were very specific about where you could buy a house. I wanted to be close to my son’s daycare and to not have a long commute to work. I love the house I found and my neighborhood and loved that the Bank’s program gave me the flexibility I needed,” said Alaysyah Yahyisrael, a Fifth Third borrower from Ohio (pictured to the left in her four-bedroom home with her 3-year-old son)

She also addressed the lack of education surrounding this type of product. Going into it, she were unaware that programs like this existed.

For other potential homeowners out there, she added that home shoppers would be surprised about all of the programs that help homebuyers.

“People think they have to have the entire down payment. But there are so many programs out there that can help,” she said. “Work with your mortgage person to find the program that will help you and then be patient for the right house.”