Economists agree that the April jobs report proved the economy is moving along at a healthy pace despite the disappointing job numbers in March.

But when it comes to the housing market specifically, this positive report does little to help the factors that are really blocking growth in housing.

As a refresher, the total nonfarm employment increased by 211,000 in April, according to the U.S. Bureau of Labor Statistics. This is up from March’s increase of 79,000 and nearly matches February’s increase of 235,000.

"Today's report is solid for sure,” explained Nela Richardson, chief economist at Redfin. “Though, it will have little impact on the trajectory of the housing market this spring and summer.”

She continued to state that the 2.5% pick-up in wages from a year ago is no match for the 8% year-over-year increase in national home prices this spring.

“So far this year there are no signs that the economy will alleviate the mismatch between incomes and home prices that continues to confound middle-class home buyers in expensive cities," said Richardson.

According to the most recent home price report from CoreLogic, home prices continued their upward trend in March, increasing year over year by 7.1% in March 2017 compared with March 2016.

Joseph Kirchner, realtor.com senior economist, expanded on the housing impact, adding that while it’s good news that the economy added 5,000 construction jobs, “It’s a fraction of what we need, and it won’t solve the inventory problems that stop consumers from finding homes to buy.”

Plus, this is inventory problem is far from new to the economy. Freddie Mac Chief Economist Sean Becketti recently noted that tight housing inventory has been an important feature of the housing market at least since 2016.

First American Chief Economist Mark Fleming broke down the construction numbers even further and stated that the pace of construction-job growth has been declining on a year-over-year basis for over a year.

“This month’s increase of 5,000 jobs is only a 2.6% increase from a year ago. As the chart below shows, the ability to increase housing starts is highly dependent on construction employment,” said Fleming. “Homebuilders are reporting that the lack of construction workers is hampering their ability to increase production, which is a desperately needed source of supply, as most markets already have very tight inventories of homes for sale. In fact, we have been underbuilding residential housing relative to demand since 2009.”

The chart below compares housing starts and construction employment. 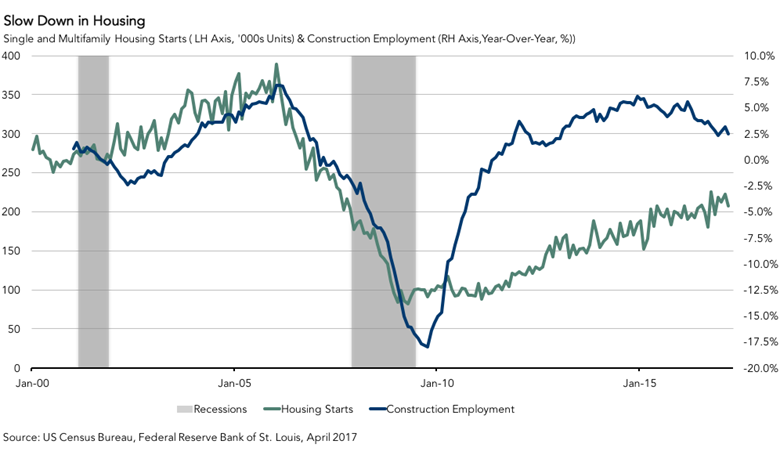 As far as the overall jobs report, economists were generally positive on the report and stated the news likely signals an interest rate increase from the Federal Reserve in the June meeting.

The Federal Open Market Committee met earlier this week for its May meeting and unanimously voted to hold off on raising interest rates.

“The pickup in hiring in the April jobs report supports the popular view that March’s weak headline was a weather-induced slowdown. The trend in nonfarm payrolls so far this year points to a steady improvement in job gains, propelling the labor market further into full employment territory,” said Doug Duncan, Chief Economist at Fannie Mae. “The report is consistent with a faster pace of monetary policy normalization this year and supports our expectation of two rate hikes in June and September and a change in the Fed’s reinvestment policy in December.”

National Association of Federally-Insured Credit Unions Chief Economist Curt Long reaffirmed this, stating, "This should ease fears of an abrupt decline in the labor market brought on by last month's weak report, but reaffirms the longer-term trend of a gradual slowing in job creation. Despite ongoing questions over muted wage growth, the Fed is likely to be heartened by the report and a rate hike in June is more likely than not."