For years, companies in the mortgage space, including banks, lagged woefully behind other industries in embracing technology. But surveying the landscape in 2017, it’s obvious that the $14 trillion mortgage market is quickly making up ground as it sprints to keep up with consumer demand for a smarter, easier mortgage process.

Ironically, the monkey on the mortgage industry’s back for the past 10 years — increasing regulation — is the very thing that forced companies to find efficiencies in every part of the process, which serves them well as they look to engage tech-savvy consumers. Even as the enforcement of some of those regulations is now in question, the long-lasting benefits of investing in automation will stand.

The mortgage sector is particularly primed for transformation, having hit the critical turning point described by a Wall Street Journal article on digital disruption from April 2016:

“First comes the use of IT to improve the productivity and quality of production-oriented, back-end processes. Distribution comes next, leveraging the universal reach and connectivity of the Internet over the past 20 years. The transformation then reaches a tipping point when technology radically changes the user experience – as has happened with the rise of smartphones over the past decade – leading to a fundamental disruption of the industry and its business models.”

Deployed within the complex individual processes that make up lending, servicing, investing and real estate, mortgage innovation comes in many forms.

Venture capital firms made big investments in online lending in the first half of 2016, but cooled off after Lending Club and Prosper ran into some mid-year trouble. This year, fintechranking.com predicts that companies delivering innovations in online real estate transactions and those that find ways to lend to the underbanked will be the biggest winners of VC money in the mortgage space.

Fintech startups have already sliced and diced everything from income verification to valuation to REO management to warehouse lending in their bid to remake the mortgage process.

• Investability allows users to sort and analyze more than 1 million MLS-listed and exclusive properties by cash flow, net yield and gross yield, matching investors with properties that meet their criteria.

Fintech companies are distinguished by their origins — they are first and foremost technology companies that apply their expertise to the mortgage space. Finding correlations between markets, their vision lets them leverage lessons learned in one industry to improve a totally different vertical. Alight, Inc., for instance, is a provider of enterprise-class applications for real-time, dynamic scenario comparison and analysis that cut its teeth in the mining industry and has since become equally visible in the mortgage space and built a client base of some 30 top customers.

“In the mining industry, they do long-range strategic planning, 10, 20 and 30 years out, then build out operating plans monthly,” said Alight CEO Michele McGovern. “They have to invest a lot of capital in equipment and all of this equipment has sensors that generate stats to help them figure out when to bring them in for maintenance, etc. As a result, mining is heavy into big data — they have millions of records every day from every part of the value chain.

“Just last year, we had an ‘aha’ moment when we were able to enhance our mortgage industry application with technology developed by our mining team. The waterfall charts that we initially developed to help mining companies the impact of the capital expenditures that are inherent in mining were equally valuable to the mortgage firms, which face similar levels of volatility and uncertainty.

“For us, it represented a huge savings of resources and allowed us to bring something new and effective to our customers more quickly than we ever could have done otherwise,” McGovern said.

Startups are tackling a variety of thorny problems, ranging from nuts and bolts production issues to expanding homeownership through new loan products, credit models and financing options. Sometimes, their most significant contribution is thinking outside the box.

Unison, for example, pioneered a program that brings investment capital to consumers. The Unison Homebuyer program partners with consumers to invest in their home, providing up to 50% of the down payment in return for a share of the appreciation in the home’s value at the time it is sold. The program is not a low down payment assistance program where the consumer assumes more debt — it is an investment that pays when the home is sold.

“Our founder, Thomas Sponholtz, used to manage portfolios for Barclays, and there was a need from certain institutional investors to diversify their portfolios, and fulfill future obligations. With pension funds, two of the biggest constraints are housing and healthcare, and the need to fund their respective liabilities,” said Michael Micheletti, director of communications at Unison. “That’s why our programs are long term — 30 years — to align with both the consumer need and the investors’ long-term strategies.”

Unison recently expanded the program, which had been available only in combination with jumbo loans, to conventional loans, and now operates in 13 states.

The velocity of change in the mortgage industry toward efficiency and automation is only going to gain momentum, propelled by the newest and largest generation of potential homebuyers, the Millennials. And this is where fintech has a distinct advantage over traditional companies.

In their Global Fintech Report from March 2016, PricewaterhouseCoopers states:

“Millennials seem to be bringing a higher degree of customer centricity to the entire financial system, a shift that is being crystallized in the DNA of fintech companies. While 53% of financial institutions believe that they are fully customer-centric, this share exceeds 80% for fintech respondents. In this respect, 75% of our respondents confirmed that the most important impact fintech will have on their businesses is an increased focus on the customer.”

WHAT ABOUT TRADITIONAL COMPANIES?

But startups aren’t the only ones harnessing innovation. A number of traditional companies are reimagining the mortgage process and forming partnerships that make the most of old and new.

The best example? The long-promised, ever-elusive eMortgage, which was finally achieved in 2016 by Radius Financial Group, which partnered with DocMagic, the MERS loan registry, Fannie Mae and Santander Bank. The group closed six loans in a completely paperless process, utilizing both lender and closing/settlement agent documentation, eNotarization, eWarehousing and eNote acceptance through DocMagic’s eClosing solution.

Linking disparate parts of the mortgage process into a seamless experience is a hallmark of mortgage disruption, and a place where traditional companies have a better chance of success.

As an article in TechCrunch by Aaron LaRue pointed out, a scalable mortgage company needs a lot of infrastructure, including a way to create consistent access to capital, a reporting infrastructure for compliance and robust operating procedures. These are things traditional companies have been working on for decades.

“When faced with the realities of originating a mortgage, many of these technology companies will pivot,” LaRue writes. “Instead of producing the actual loans, they’ll become sales and marketing vehicles that capture the customer, take the application then serve as a broker for an established mortgage company that can do the heavy lifting.”

For LaRue, true mortgage innovation would be realized from a hybrid of startup and legacy companies. “Ideally, an innovative mortgage company would combine a customer-focused, experience-driven product team with a group of seasoned mortgage professionals. This super-team would come together, surrounded by the infrastructure required to grow and fed with capital to invest in building a platform, and they could fundamentally change the way home loans are done.”

Some of these hybrids already exist. Last year BBVA bought Simple, giving BBVA about 100,000 new customers while giving Simple more resources to grow. Santander partnered with other financial institutions to invest $135 million in fintech lender Kabbage in 2015, providing small business loans. And SoFi, a student refinance lender that is itself a fintech company, recently acquired Zenbanx, a fintech mobile bank.

This kind of collaboration has huge potential, since for all the talk of disruption, the effect of fintech on the overall mortgage market is still very small. The Wall Street Journal reported in April of 2016, “Greg Baxter, Citi’s global head of digital strategy, notes that in the U.S. and other developed markets ‘We are not even at the end of the beginning.’ While really difficult to forecast this early in the cycle, his Citi team estimates that ‘currently only about 1% of North American consumer banking revenue has migrated to new digital business models (either at new entrants or incumbents) but that this will increase to about 10% by 2020 and 17% by 2023.’”

If other disrupted industries are any guide for the future, the mortgage industry will see a frenzied pace of innovation in the next five to 10 years. Startups and legacy companies alike should heed the advice of computer visionary Alan Kay: “The best way to predict the future is to invent it.”

Fintech startups received a strategic boost from the Office of the Comptroller of the Currency in December when the regulatory agency announced that it would offer a new type of banking license for fintech companies.

The goal of the special purpose national bank charter, according to the OCC, is to “expand financial inclusion, reach unbanked and underserved populations, make products and services safer and more efficient, and accelerate their delivery.”

The new charters are available to fintech firms that conduct at least one of three core banking activities: receiving deposits, paying checks or lending money.

In explaining its decision, the OCC outlined three compelling reasons for the new charters:

1. Fintechs can potentially deliver banking products and services in a safer and more efficient manner than traditional banks.

2. They should have the choice to become national banks if they want to do so.

3. For fintechs that want to become banks, it’s safer for them to enter through a “clearly marked front gate” of expectations and compliance.

The big question, of course, is whether these new charters are fair to traditional banking institutions.

The OCC heard plenty of comments related to “regulatory fairness and supervisory rigor” and responded with this statement: “The worry here is that by providing a special purpose national bank charter we are somehow tipping the balance of competition by allowing special purpose banks to compete with full-service banks without assuming any of the responsibility. 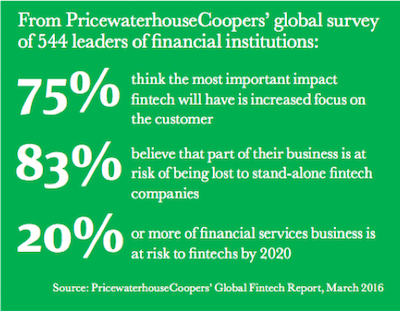 “But, the reality today is that the 4,000 fintech companies out there are already competing with national and state banks, without regard to any of the national bank responsibilities and under a patchwork of supervision. Granting national charters to the companies who desire and warrant one doesn’t weaken the competitive position of existing banks or the dual banking system. In some ways, it levels the playing field because statutes that by their terms apply to national banks would apply to all special purpose national banks, even uninsured ones.

“This would include, for example, statutes and regulations on legal lending limits and limits on real estate holdings. And as far as providing ‘lighter touch’ supervision, I have made it clear that if the OCC grants a national charter in this area, the institution will be examined regularly and held to the high standards the OCC has established for all federally chartered institutions.”

Indeed, during the comment period, some of the feedback was not from traditional banks complaining about an unfair advantage, but from fintech companies who don’t welcome the regulatory infringement.

Timothy Li, founder and CEO of Kuber Financial and creator of Fluid App, summarized that sentiment in a blog on Crowdfund Insider. “Fintech entrepreneurs have dedicated most of their careers to solving some of the most complex issues in our financial system; we don’t have the time, energy or resources to be bogged down by getting a nod from a century old risk committee.”

With the new emphasis on deregulation by the Trump administration, it will be interesting to see how the OCC’s new charter system fares, and how it is received by the industry.