The federal government will continue investigating whether foreign buyers are using high-end U.S. real estate to launder money after an expanded investigation found that potentially illicit activity is behind as many as one in three cash purchases from foreign buyers in select markets.

Last year, the Treasury Department’s Financial Crimes Enforcement Network said it was “concerned about illicit money” being used to buy luxury real estate in Manhattan and Miami-Dade County, and planned to launch an investigation into the unknown buyers who used shell companies to hide their identities.

The results of that initial investigation showed more than 25% of transactions covered in the initial inquiry involved a “beneficial owner” that is also subject of a “suspicious activity report,” which is an indication of possible criminal activity.

Those results led FinCEN to expand the investigation beyond those two areas, adding all of New York City, Los Angeles, San Francisco and several other areas.

The extended investigation was due to end this month, but FinCEN announced Thursday that it is extending the investigation by another 180 days after finding compelling evidence that warrants further investigation.

The extended investigation involved the issuance of a “Geographic Targeting Order,” which required title insurance companies in the designated areas to identify the actual person behind shell companies used to pay all cash for high-end residential real estate.

According to FinCEN, its investigation found that about 30% of the transactions covered by that GTO involve a “beneficial owner or purchaser representative that is also the subject of a previous suspicious activity report.”

FinCEN said that these results corroborate the agency’s concerns about the use of shell companies to buy luxury real estate in “all-cash” transactions.

“These GTOs are producing valuable data that is assisting law enforcement and is serving to inform our future efforts to address money laundering in the real estate sector,” said FinCEN Acting Director Jamal El-Hindi. “The subject of money laundering and illicit financial flows involving the real estate sector is something that we have been taking on in steps to ensure that we continue to build an efficient and effective regulatory approach.”

Under the terms of the new GTO, title insurance companies in the following markets will be required to reveal the individual behind all-cash, high-end real estate transactions:

See the chart below for the relevant dollar thresholds. 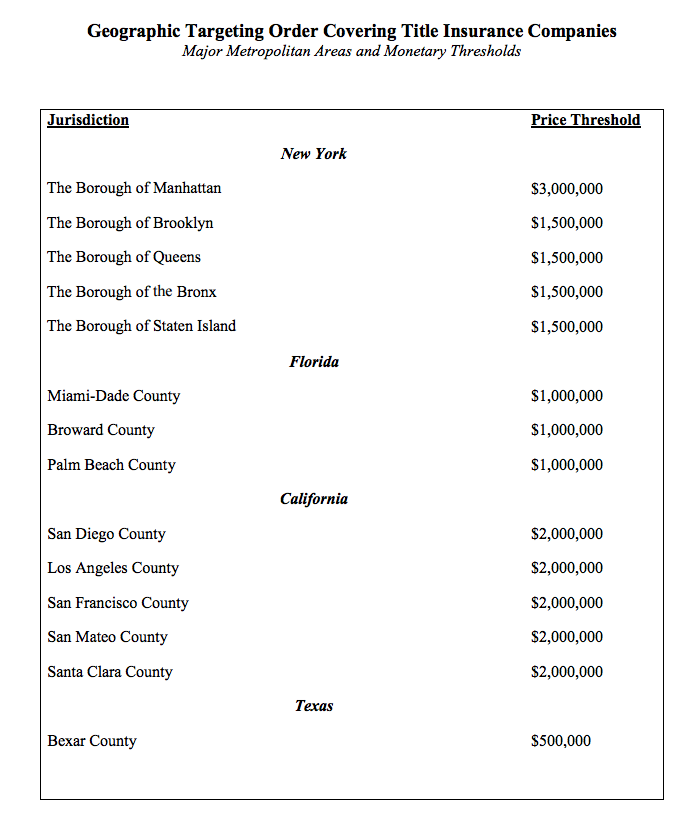 While the burden of identifying the actual buyers behind these cash deals falls on title companies, FinCEN said that title companies are not the target of the investigation, and adds that it appreciates the title companies’ assistance.

“The GTOs do not imply any derogatory finding by FinCEN with respect to the covered companies,” FinCEN added. “To the contrary, FinCEN appreciates the continued assistance and cooperation of the title insurance companies and the American Land Title Association in protecting the real estate markets from abuse by illicit actors.”

When new home sales and housing starts begin to fall together, a recession is usually not far away. However this report needs context.