The deadline, while it has constantly moved, is quickly approaching for struggling borrowers to take advantage of the government’s Home Affordable Refinance Program. And to add another factor on top of this, rates are only projected to increase.

The FHFA announced in August that it extended HARP until Sept. 30, 2017 in order to create a smoother transition period for a new refinance product it is planning to launch toward the end of 2017.

In one final push, the Federal Housing Finance Agency announced in September that it was trying one last time to capture the remaining 323,000 homeowners who could save an average of $2,400 per year through HARP.

Even though only a few months have passed since the announcement, the FHFA has already made some progress on reaching the remaining group of borrowers that are still out there.

Approximately 15,597 borrowers refinanced their mortgages through HARP from July through September, bringing total refinances from the inception of the program to 3,434,451, according to the FHFA's third quarter Refinance Report.

This brings the updated amount of borrowers who are still eligible for HARP as of the second quarter of 2016 to 242,512.

On average, the FHFA said that these borrowers could save $2,400 per year by refinancing their mortgage through HARP.

Currently, ten states account for more than 60% of the nation's HARP eligible loans with a refinance incentive as of June 30, 2016.

This chart shows those ten states and the amount of eligible borrowers in each state. 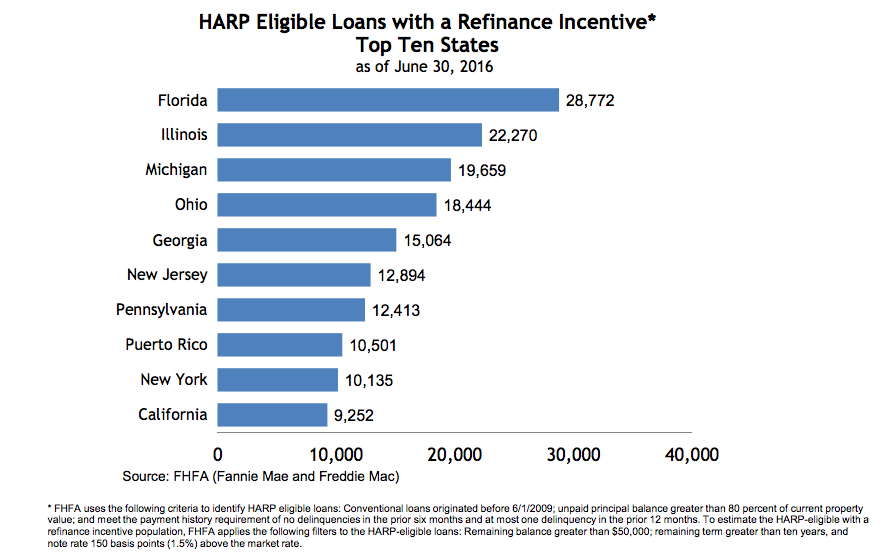