Celebrity sightings aren’t unusual at mortgage industry conventions, but they usually involve keynote speakers or concert headliners. What is less common, even downright scarce, is the appearance of a bona fide movie star who has an actual stake in a mortgage company and shows up to talk about it.

That’s why sightings of Kevin Costner during the course of the Mortgage Bankers Association’s annual convention last week caused such a stir. And some confusion. What was Costner’s interest in mortgage lending?

Turns out the acclaimed actor, director and producer is one of the original investors in Lender Price, a mortgage pricing engine startup that he and business partner Rod Lake have nurtured for the last three years after meeting CEO Dawar Alimi and brothers Ly Kou Nhiayi, CTO, and Ly Kao Nhiayi, CTA. Since then, Glenn Stearns has also signed on as an investor in the company. 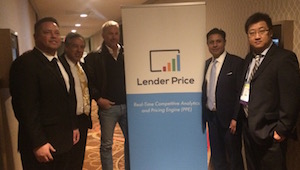 Costner and Lake have been investing together for the last 20 years in a variety of projects — everything from funding major motion pictures to founding Blue Planet Water Solutions, which successfully deployed oil-water separation technology used during the cleanup of the Deepwater Horizon oil spill in 2010.

Their desire to invest in fintech was sparked by meeting the founders.

“What you try to do in any business venture is identify people who are really gifted, really special — whether those people are writers, actors, scientists or engineers,” Costner said. “What I found is that these three guys were doing something really different that hadn’t been done before. They are innovative in the way they work and think.”

Applying technology to the mortgage space was a matter of good timing, according to Alimi.

“The mortgage industry was ripe for disruption,” Alimi said. “Back in 2008 the industry was just trying to find its way back to normalcy. Right now if you look at the mortgage landscape, it’s the right time for this technology: e-signatures are now the norm and more companies are embracing mobile. But there wasn’t anyone out there doing mobile pricing.”

The platform garnered a lot of attention from big venture capital companies, but Costner and Lake took a different approach.

“This is not a fund of other people’s money, it’s our money,” Lake said. “To us, investing is not always about the product, it’s about the people, and here we have three incredible people.”

Costner agreed. “There had to be a level of poetry to what we’re doing,” he said. “It’s really a perfect marriage of what they bring and how we can help them.”

Alimi recognized the symmetry right away.

“Rod and Kevin were able to provide much more than any other investor would — they have the commitment to ensure the success of the organization,” Alimi said.

Although Costner had the first contact with the trio, Lake has more expertise in mortgage tech and conducted much of the due diligence that led to the investment.

But Costner made clear, “I’m not a hood ornament. We take very active roles in the companies we invest in — we don’t sit on the sidelines.”

Alimi echoed this. “A lot of people think Kevin is just a movie star — someone who invests money but doesn’t take part in the investment, but that couldn’t be further from the truth.”

Despite the hands-on approach, both Costner and Lake respect the process of the original creators. “We recognize that our strength comes out of their abilities,” Costner said.

One of the things that impressed Costner about Lender Price was the transparency of the pricing process it offers.

“I bought my first house when I wasn’t sure I could really make the payment,” Costner said. “Since then I’ve bought multiple times, but I was always at the mercy of lenders saying they were doing the best deal they could for me. Buying a house is one of the largest expenditures people ever make, and they should make sure they have the right answers.”

Lake, who sold real estate in Silicon Valley in the 1970s, said he connected with the efficiency and mobility of the platform.

“I was only in the real estate business for a few years, but when I met Dawar I realized that the process hadn’t evolved from when I was 18,” Lake said. “With Lender Price, lenders can get really accurate pricing information — and get it on their phone.”

The company’s mobile play is central to its mission of providing real-time pricing and analytics.

“With Lender Price, any loan originator can price out a deal anywhere, at any time,” Alimi said. “Lenders can’t know if they have the best pricing if their analytics are 24 hours old. Our real-time pricing and analytics, combined with the mobile capability, means lenders can determine exactly what their competitors are offering from a pricing perspective.”

The investment Costner and Lake made in Lender Price reflects one of the hallmarks of their investment strategy: don’t do anything halfway.

“I like it when we swing for the fences,” Costner said. “Rod and I, we’re like riverboat gamblers. We’re all in, and it’s not a bluff.”

That approach has reaped dividends in multiple ways over the years, Lake said. “In both my life and Kevin’s life, the stack of wins is pretty high. There are losses too, and that’s where you learn the most.”

The three companies featured in this section offer innovative solutions so lenders can provide a better customer experience and increase their profit margins.