The hottest housing market in America right now might still be Vallejo-Fairfield, California [San Fran area] but this doesn’t mean the rest of the list stood still. Interestingly, one new market not only joined the list, but also jumped up to the eight spot. And to the city that was sitting comfortably as the eighth hottest market, well, it fell completely out of the top ten, barely even making the top twenty.

Needless to say, the summer housing season was on fire, recording the hottest August housing market in a decade, as Jonathan Smoke, chief economist for realtor.com, the creator of the hottest medium-sized to largest market list, explained.

“Summer 2017 was one of most competitive buying seasons that we have ever witnessed, fueled by historically low mortgage rates and inventory shortages that resulted in record-high prices,” said Smoke.

“With the school year starting now in most of the country, we’re seeing some drop-off in demand, which may provide some relief for buyers weary from battling it out against other buyers all summer,” he noted.

So what exactly is hot?

According to realtor.com, the hottest markets received from 1.4 to 4.5 times the number of views per listing compared to the national average, and in terms of supply, these markets saw inventory move from 21 to 39 days more quickly than the rest of the U.S.

On the positive side for home shoppers, the report stated that the hottest markets saw inventory movement slow down slightly, with the median age increased by two days on average from July.

Also, the median age of inventory in August is expected to be 72 days, down 3% from last year and up 6% from last month, while the median listing price for August should reach a record high of $250,000, an 8% increase year-over-year and flat compared to July, the report found.

Given all these conditions, here are the 20 hottest housing markets for August: 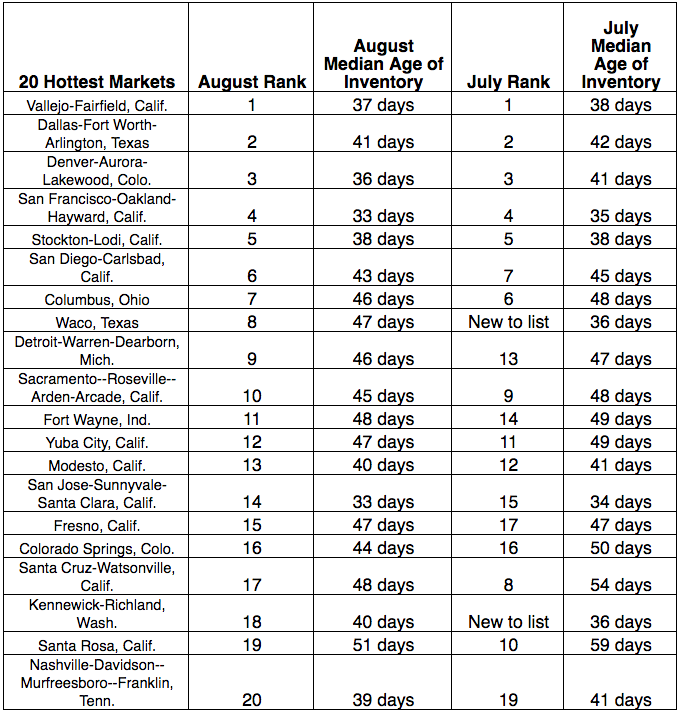