Max Florian, a 26-year-old public relations professional in New York City, has been renting a home for the last seven years. While he says he has considered purchasing, he adds, “it simply isn’t realistic for me as a young person living in New York City, where property costs are prohibitive.” He says he might consider buying if he was certain he’d be living in a particular area for a decade or more, but explains renting gives him “flexibility over the short-term” and that he enjoys having the ability to move if he wants to.

It’s a sentiment shared by many Millennials, who watched their parents and grandparents struggle through the Great Recession, saw home values plummet and many households go into foreclosure. Many are in no hurry to become homeowners, but to think the Recession is the sole reason for this attitude would be a mistake.

Take Wes Benter, for example. He’s a single, 33-year-old living in New York who works full time for ProfNet and attends law school part-time at night. He’s been renting his entire adult life, since graduating college in 2004.  “Until 2011, I was able to keep my rent under $1000/month,” Benter says. “Since then, it has increased significantly. I now pay $1550 per month and plan to move to the boroughs to regain control of my finances.”

Benter says buying is a long-term goal and that he’s almost done it on two occasions, in no small part because he often feels that with renting “I’m throwing my money out the window.” But at the same time, he says he wants to be assured of financial stability before making a home purchase and, realistically, he says he may not buy before age 40.

WHAT THE NUMBERS SAY

Has the Great Recession launched a new era of renting versus buying that will eventually result in a nation where more people rent their homes than purchase them? Or is the increase in renters these days due to an “over-correction” in the market? Will homeownership rates swing back, causing multifamily bubbles in places like California, central Texas, and New York City, where apartment construction has been booming?

At the height of the housing bubble, 69% of American households owned their homes. As of 2015, that number had fallen to 63.7%. According to the latest “State of the Nation’s Housing” report from Harvard’s Joint Center for Housing Studies, the U.S., in less than a decade, lost all its homeownership gains of the last 20 years. We are now back where we were in 1993. And this decade is on target to show the largest renter growth in recorded U.S. history.

David Brickman, executive vice president of multifamily for Freddie Mac, says, “It’s a mistake to look at it as a desire to rent. It’s new urbanization. Young people and baby boomers alike have a desire to live closer into the cities.” He adds, “I don’t see homeownership swinging back.”

In 2014, the country saw the most rental housing construction since 2001, with the creation of 161,518 new units, according to commercial real estate analytics firm Reis. Austin, Houston, and Washington, D.C., have seen especially marked growth in apartments. Reis also reported that in 2014, rents rose 3.4% nationwide.

The Joint Center report indicates that in 2015, rental rates grew at twice the pace of inflation.

“We started 2016 with good momentum on the heels of a strong year,” explains Steve Guggenmos, Freddie Mac Multifamily vice president of research and modeling. “This year, more multifamily supply will enter the market at a pace not seen since the 1980s. We expect the multifamily sector to continue to grow at a robust level, with the national vacancy rate staying below the historical average throughout 2016, and ending the year under 5%.”

All of these new renters are not Millennials, however. The Harvard report indicated that 42% of the growth in renter households in the last 10 years is among people 55 and older. Further, one-third of all new renters since 2011 have come from the wealthiest fifth of U.S. households.

Chris Herbert, managing director of the Harvard Joint Center for Housing Studies, says, “A lot of this reflects fallout from the foreclosure crisis. It was baby boomers and echo boomers who took the biggest hit.” Additionally, he points out, more people in higher income brackets are remaining renters longer. “We’ve seen a 1.6 million increase in renters making over $100,000 per year in the last decade,” he said.

But Herbert doesn’t find the drop in homeownership rates and the increase in renters disconcerting. “When we had home ownership rates at 69%, people were buying homes as a financial decision rather than as a place to live,” he said.

Ryan Severino, senior economist and director of research at Reis, agreed: “I think it’s a reversion back to the mean.” He points out that between the 1960s and late 90s, homeownership rates averaged 64.4%. Now the rate is 63.8%.

The Urban Institute has claimed homeownership in the U.S. is going to decrease even further, dropping to 60%. Meanwhile, the Mortgage Bankers Association projects the rate will eventually go back up to 66%. What becomes “the new norm” may be anybody’s guess, but Severino calls the high ownership rates of a decade ago “an artificial increase.” He said anyone who thinks homeownership is going to continue to be the norm that the average American strives for is comparing today’s figures “to the run-up to the early 2000s.”

Herbert added, “The last 10 years have been an anomaly…7 to 8 million people were forced out of their homes by foreclosures.” 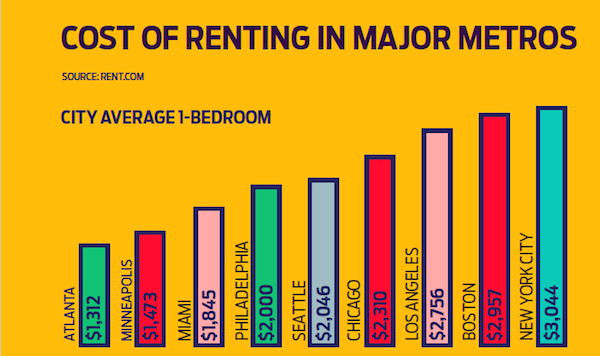 WHY HOMEOWNERSHIP IS IN DECLINE

For the most part, those who underwent foreclosure in the last 10 years have become renters. Consider that alongside the fact that the Millennial generation (which is made up of more than 53 million working-age adults, according to the Pew Research Center) are marrying and having kids later than previous generations, and it’s not unnatural or alarming, in Herbert’s view, that rental rates have been steadily rising while homeownership rates have declined.

And given there was very little multifamily construction occurring during the Recession, builders have been playing catch-up to meet rental demand. “It takes a while for starts to turn into completion,” Herbert pointed out. “As more rental housing comes online, we’ll see some moderation in rental growth.”

The strongest markets (i.e. those with the highest cap rates for rental housing investment) include Memphis, Oklahoma City, Pittsburgh, Cincinnati, Houston, and Indianapolis, according to HomeUnion.

Does this mean a multifamily bubble could be on the horizon? If so, Severino thinks bubbles will be highly localized and most likely in markets that have overbuilt in Class A multifamily. He acknowledges there are still rental housing shortages in this country for affordable residences.

As Brickman points out, a 750-square-foot apartment in San Francisco now rents for as much as $4,000 per month. “Eventually, business will move out of areas that are too expensive,” he said.

But Severino said he understands why developers are focusing on Class A construction. Building Class B and C apartments won’t pay, especially when a developer has to finance the construction. “Economically, you can’t build anything but Class A,” Severino said. “We didn’t build coming out of the Recession because there was no financing. I think this year is going to be the high water mark for construction.”

Herbert said tight credit standards have also played a role in decreasing rates of homeownership, pointing out that borrowers with credit scores lower than 640 have had virtually no access to traditional credit for years. The only option for low- to mid-credit rating borrowers has been the Federal Housing Administration.

“Eighty-five to 90% of people say they prefer to own a home,” Herbert said, “but we’ve never seen a homeownership rate that high.” He believes most Americans still maintain a preference for owning and points to average national inventory of homes for sale standing at about six months, which is a normal market.

“The young people are not going to be young forever,” Severino said, “and the average condo won’t accommodate a family of four.”

True enough. But young people are starting families later and, thus, also buying homes later. “The vast majority of Americans will own a home at some point in time,” Brickman said, “but the question is how long? People are going to buy later and sell earlier.”

“I think we are going to see homeowners struggling to make mortgage payments in retirement like we’ve never seen before,” Herbert said.

As for Benter, he says he’s going to continue renting for the foreseeable future. “It’s just not the right time to buy,” he said. “Buying in New York requires a lot of upfront cash.” For now, he plans to continue saving and investing his money and will buy a home eventually, as he says he’s basically throwing away $18,500 a year in rent. When he considers that, he says, “Real estate seems like a good investment for the future.”

Landlords looking to attract apartment and condo renters have to offer a lot more than just an open floor plan these days. As an article in the Cleveland Plain Dealer in February outlined, amenities have become all-important.

“Renters want private elevators, spas for pets and concierges at even mid-priced apartment complexes,” the article stated. “Bike spas, where bicycles can be serviced, cleaned, parked and stored, are popping up in neighborhoods where commuters are using bike lanes. Car care services and even a rock-climbing wall have been incorporated into multifamily living buildings.

“Renters also want more rooftop attractions – pools, park-like areas, wine bars, putting greens, veggie gardens and entertainment areas…renters like the view and the idea that it is common space and therefore ‘belongs to them.’”

And Cleveland is not alone. Take a look at these icons that represent the most popular amenities, according to an article in Building Design and Construction: 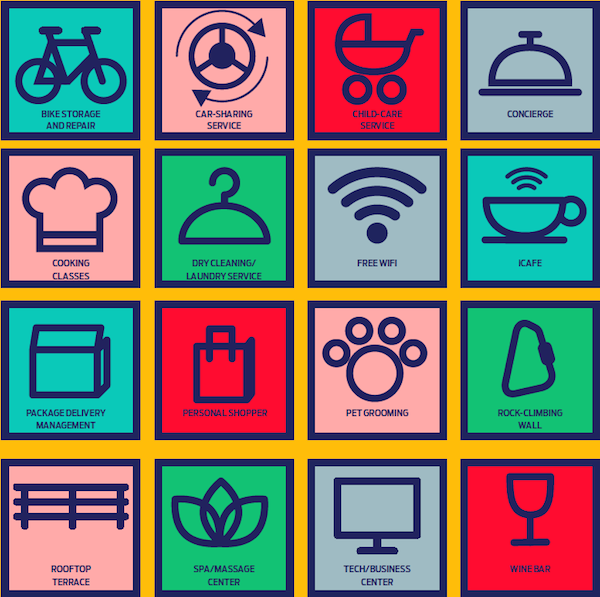