Housing starts are infamous for being volatile and portraying a muddy description of what is going on in the housing market, with the latest March numbers only further echoing this point as analyst comments range from ‘impressive’ to ‘highly disappointing.’

At its core, according to data released Wednesday by the U.S. Department of Housing and Urban Development and the U.S. Census Bureau, privately owned housing starts in March came in at a seasonally adjusted annual rate of 1,089,000, down 8.8% from the revised February estimate of 1,194,000, missing expectations. However, housing starts were 14.2% higher than the March 2015 rate of 954,000.

But as a result, realtor.com Chief Economist Jonathan Smoke said, “It is highly likely that the less severe winter may have pulled forward more activity into February from March, thus juicing last month’s very positive report on starts and delivering this disappointing report.”

“Today’s housing starts data is further proof of the volatile nature of these reports. While an 8% drop sounds like a major hit to the housing market, it’s important to focus on the overall upward trend of growth showing opportunities for a strong housing market remain in place,” said Quicken Loans Vice President Bill Banfield.

For example, Trulia Chief Economist Ralph McLaughlin focused on the 12-month rolling total of new housing starts, citing that it “grew impressively, and the April 2015 – March 2016 period represents the best 12-month span for starts since August 2007.”

McLaughlin noted that the 12-month rolling total of starts is a more statistically robust measure of trends in housing start. And looking at that data, it grew 13% year-over-year in March to 1,143,000 starts. This represents the most starts in a 12-month period since August 2007, he said.

While optimistic, McLaughlin disclaimed that the 12-month rolling total is still 21% below a 50-year average of 1,444,085 starts. This is unchanged from February.

On the other side of the spectrum, Brent Nyitray, director of Capital Markets, iServe Residential Lending, called today's housing starts "highly disappointing."

“It is astounding that we have such a deficit of housing in this country, and are building 25% fewer homes than we did before the bubble, Housing (or lack thereof) has been the reason why this recovery has been so weak,” he said.

Nyitray explained the chart below saying “typically you see V-shaped recoveries in housing starts, however this time you haven't. Granted some of that was due to oversupply from the bubble years, but that excess inventory got worked off years ago. Is the problem a lack of skilled labor? Credit? Regulation? Probably all three.” 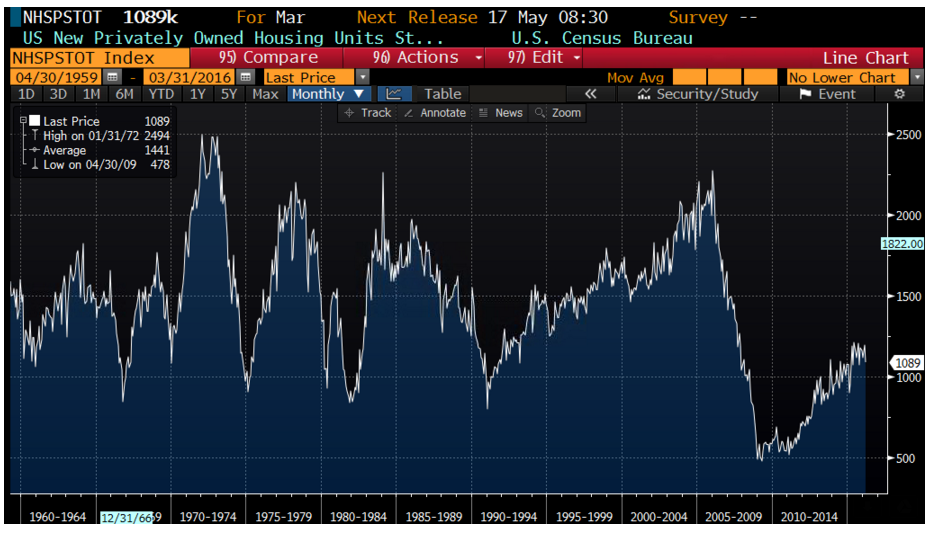 At least one of Nyitray's possible reasons may be countered via another opinion.

An article in CNBC by Diana Olick said lack of skilled is no longer a plausible excuse behind the decline.

"Our analysis of payroll growth and wage inflation data suggests that labor shortages may not be to blame for the mediocre level of housing activity," Goldman Sachs analysts wrote in a report this week. "We find that, on the one hand, the construction sector has experienced the largest job growth over the past year."

When looking at the long-term trend, Smoke’s warned that the most troubling trend in starts is the 2% decline in multi-family on a year-over-year basis

“We had anticipated that single-family would start to outpace multi-family growth in 2016, but an actual decline would limit housing's contribution to economic growth and would also lead to continued low vacancies and shortages in rental housing,” he said.

There is still hope however.

“It’s still early in the year so these trends can change (and indeed the data could be revised next month).  However, this anemic pace of activity, especially in multi-family, will not help us address the serious lack of affordable housing that the country faces,” Smoke said.