TRID, aka Know Before You Owe, caused mortgage lender back office fulfillment and post-closing costs to increase by an average of $209 per loan since October 2015, a new study found.

And what's even more costly, lenders estimate only about 17% of those costs can be recovered through additional charges.

But, after the math of how much it costs, the survey also shed light on the true goal of TRID — borrower satisfaction.

STRATMOR Group, an advisory firm for the mortgage lending industry, released results from its TRID – Impact and Experience Spotlight survey of mortgage industry executives, alongside data from its MortgageSAT Borrower Satisfaction Program.

[Editor's note: The reach of the survey is limited and therefore may not be applicable to the larger mortgage finance industry. For a full breakdown, see the chart at the bottom.]

“Implementing TRID has obviously not been easy for lenders. It’s been costly as well,” said Matthew Lind, STRATMOR senior partner and founder.

It's aim is to help inform financing options open to potential homeowners.

"Taking out a mortgage is one of the biggest financial decisions a consumer will ever make. Our new ‘Know Before You Owe’ mortgage forms improve consumer understanding, aid comparison shopping, and help prevent closing table surprises for consumers," said CFPB Director Richard Cordray back in November when the finalized rule came out.

And according to the new STRATMOR report, “TRID seems to be associated with a significant pickup in borrower satisfaction, despite somewhat slower application-to-closing times. At the end of the day, improving the borrower’s experience is a main objective of TRID, and in an increasingly competitive origination market, it is also a primary goal of lenders as well,” said Lind.

The report found the time to process a mortgage from application to closing, after initially increasing, is moving back towards pre-TRID levels. The proportion of borrowers contacted by their lender prior to closing steadily increased from 85% to 91%.

On a more positive note for lenders, the survey reported TRID implementation seems to be largely complete, with the vast majority (87%) of survey respondents reporting implementation either fully or mostly accomplished. Only 1% said their efforts were “way behind.”

This chart shows the impact of TRID from September 2015 to March 2016. 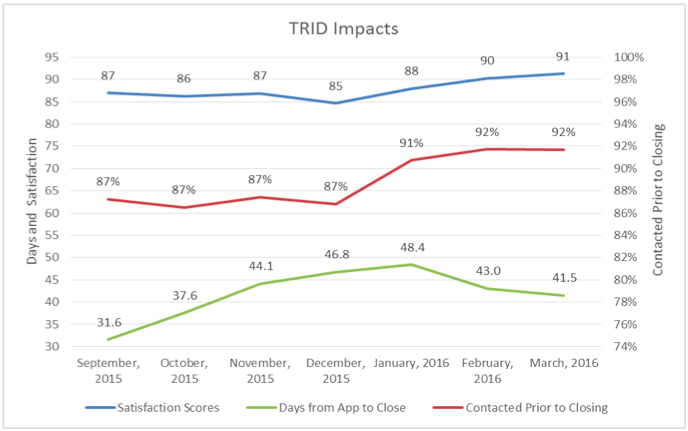 Ellie Mae latest Origination Insight Report echoed this, also reporting that the initial blow of TRID was over.

“In terms of Know Before You Owe, I think we’re in the second half of the game. We’ve gotten past the initial learning curve that comes from brand new regulation and we’ve figured out, as an industry, how these processes and these interactions happen. There are still some open areas and items that need to be worked out before we can say it is collectively behind us,” Jonathan Corr, president and CEO of Ellie Mae, told HousingWire.

It’s important to note that the response rate for the survey was very weak with less than 100 lenders involved.

This chart shows the methodology break down.