While the latest new home sales report didn’t post any game-changing news, it still signals a positive outlook for the housing market amid a lot of economic data showing a lackluster housing market.

According to the U.S. Census Bureau and the Department of Housing and Urban Development report, sales of new single-family houses in February 2016 were at a seasonally adjusted annual rate of 512,000. This is 2% above the revised January rate of 502,000 and is 6.1% below the February 2015 estimate of 545,000.

The median sales price of new houses sold in February 2016 was $301,400. The average sales price was $348,900, while the seasonally adjusted estimate of new houses for sale at the end of February was 240,000. This represents a supply of 5.6 months at the current sales rate.

“With minimal income growth, the threat of rising rates (at least at some point in the future), and declining confidence regarding the sustainability of the U.S. recovery, many potential buyers remain sidelined either from a lack of ability or willingness to make a home purchase,” she added. “Going forward, housing is likely to remain a sector of support for the recovery but hardly the catalyst to above trend growth; housing, first and foremost, is no longer the large net drag on topline activity, but neither is it the primary driver of the economy as it once was.”

In Trulia Chief Economist Ralph McLaughlin’s analysis of Wednesday’s new home sales report he cautioned that all new home sales numbers from the U.S. Census are extremely volatile. “The margin of error is wide and often includes zero, which means we can't be certain whether the month-over-month or year-over-year changes actually increased, decreased, or stayed flat,” he explained.

Instead, McLaughlin pointed to the 12-year rolling total, which is up 9.7% year-over-year but down 0.1% month-over-month. 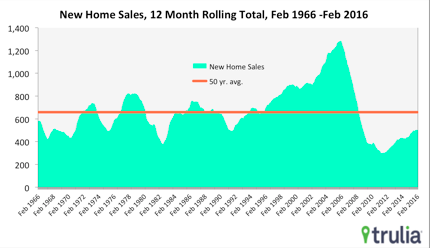 “This reflects a slow but steady increase in demand from homebuyers as well as increasing confidence of homebuilders. It is also a positive sign for the U.S. economy headed into 2016, as new home sales leads to new construction and consumer demand for housing-related goods and services. Despite the positive news, new home sales remain still remain about 24% below the 50-year average,” he continued.

Still, things could be better.

“It is possible that some home sales fell through in February due to the stock market turmoil in January and the first half of February. That hit to confidence led to a 5% m/m decline in mortgage applications for house purchase in February, even with mortgage interest rates also dropping back,” said Capital Economics property economist Matthew Pointon.

“But markets have calmed since,” he added.