Approximately 5.2 million borrowers could likely both qualify for and benefit from refinancing, but it’s possible that this number will be slashed in half by the end of the year.

“This population is diminishing, and as mortgage interest rates rise, it will only continue to shrink further,” said Graboske.

He added that this is already down from over 7 million as recently as April 2015, when interest rates were below 3.7%. 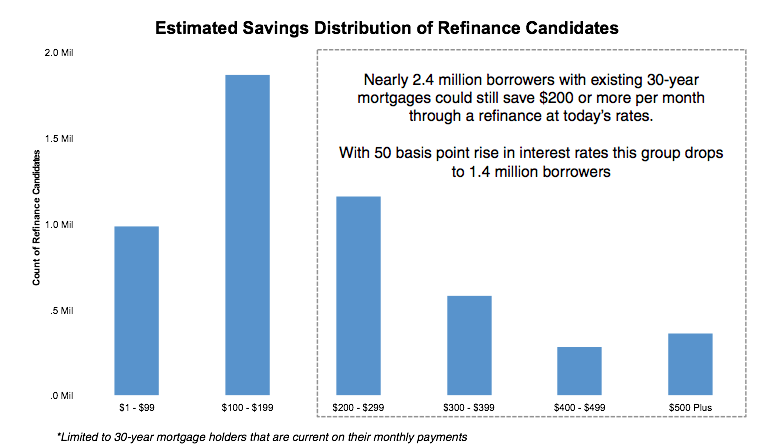 This giant fall out of refinance eligible borrowers could actually come to fruition if Freddie Mac’s predictions for 2016 come true.

Freddie Mac’s chief economist, Sean Beckett, said the market should expect the 30-year fixed-rate mortgage to average below 4.5% for 2016 on an annualized basis.

CoreLogic’s 2016 outlook for housing echoed this saying, “Fixed-rate mortgages will rise, perhaps up one-half of a percentage point between now and the end of 2016, reaching 4.5% for 30-year loans.”

For those who do choose to refinance, Graboske said, “Some 2.4 million are looking at potentially saving $200 or more on their monthly mortgage payments post-refinancing. Again, this is a very rate-sensitive population: after a 50-basis-point rise in rates, a million borrowers would lose out on those savings.”