In the aftermath of the economic crisis of the late 2000’s, the federal government passed a number of sweeping laws that irrevocably changed the financial landscape of this country.

The Dodd-Frank Wall Street Reform Act and the subsequent establishment of the Consumer Financial Protection Bureau significantly altered how the county’s financial system operates, but just how much?

According to a new report from analysts at the Federal Reserve Bank of Dallas, the Dodd-Frank Act and other additional financial regulations have not only made it more difficult for financial institutions to operate, they’ve kept new banks from forming since the financial crisis.

In the new report from the Dallas Fed’s Financial Institution Relationship Management team of Preston Ash, Christoffer Koch and Thomas Siems, the analysts write that “practically no new banks have entered the market since 2008.”

According to the report, since 2010, the U.S. has had only one de novo bank charter, an Amish-backed bank in Pennsylvania called Bank of Bird-in-Hand.

There have been other banks enter the market, the report notes, but those have been thrift conversions connected to the dissolution of the Office of Thrift Supervision in 2011.

As the chart below shows (courtesy of the Dallas Fed report), the number of banks exiting the market has exceeded new entrants in every year since 1983 as the industry consolidates, but the Fed analysts state that the lack of new charters in recent years is “alarming.” On the other hand, according to this list from the Federal Deposit Insurance Corporation, scores of banks have been closed since the financial crisis. 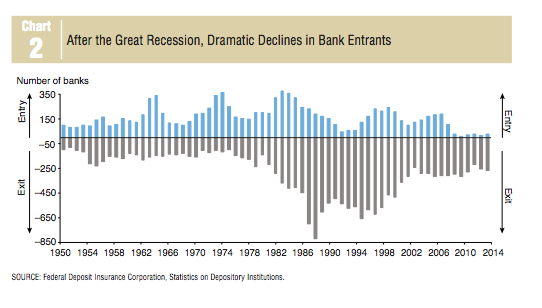 So what is causing the lack of new banks? The analysts write that regulatory concerns are the top concern for the financial institution leaders that they speak to. The analysts also say that the financial institution leaders they speak to tell them that regulatory concerns are not just an issue now, but they worry significantly about them moving forward.

The report states that in the 1950’s these reports were four-page filings, and they’ve grown exponentially since then. As seen in the chart below (also courtesy of the Dallas Fed), the reports for the smallest institutions grew to about 30 pages in the 1980s, about 40 pages in the 1990s and about 50 pages in the 2000s. Now, the Call Report is 84 pages. 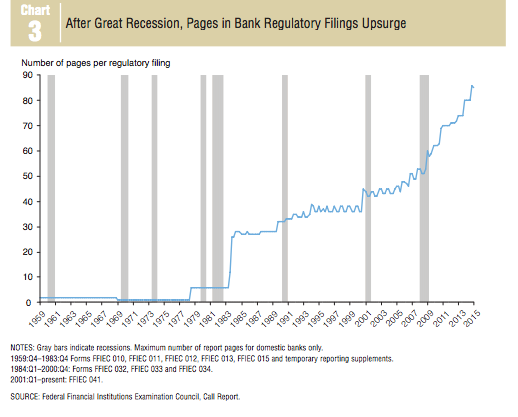 Additionally, the complexity of regulation has increased significantly as well.

According to the Fed report, the analysts examined a list from the Federal Deposit Insurance Corporation that has banking legislation that has “significantly impacted” the financial sector in the last 100 years.

The last item on the list is the Dodd–Frank Wall Street Reform and Consumer Protection Act of 2010 and contains 849 pages.

According to the report, from 2001–10, ten major banking acts became law, totaling 1,858 pages, as illustrated in the chart below (again courtesy of the Dallas Fed). 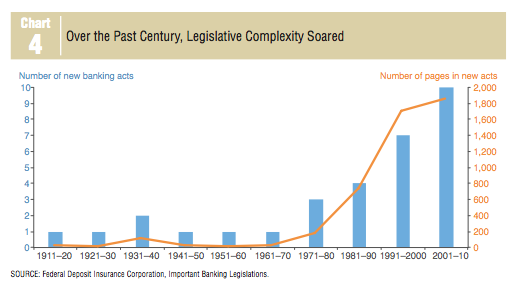 The Fed analysts state that banks of all sizes and complexities have to hire compliance personnel to deal with these new regulations, but note that the impact on smaller banks is much more significant.

“Community banks continue to play a unique and vital role in the U.S. economy,” the analysts write.

“Although the number of community banks and their share of banking assets has declined, community banks are important lenders in small-business and agricultural markets,” the analysts continue.

“Community banks are relationship lenders. Their comparative advantage is to know their customer, understand their markets and needs and provide flexible services,” they continue.

“Yet, in a regulatory environment that increasingly addresses big bank processes and tends to be ‘one size fits all,’ smaller community banks appear to have a valid concern that their compliance burden is rising and the playing field is becoming more uneven,” the analysts conclude. “Regulatory oversight should match the level of risk an institution poses to the financial system and economy at large. Otherwise, more banks may become too small to succeed.”

When new home sales and housing starts begin to fall together, a recession is usually not far away. However this report needs context.