Foreclosure filings — default notices, scheduled auctions and bank repossessions — were reported on 115,134 U.S. properties in October, up 6% from the previous month. This is still down 6% from a year ago, the latest RealtyTrac Foreclosure Market Report for October 2015 showed.

The rise was caused primarily by a 12% monthly jump in foreclosure starts, with 48,605 properties starting the foreclosure process for the first time in October. 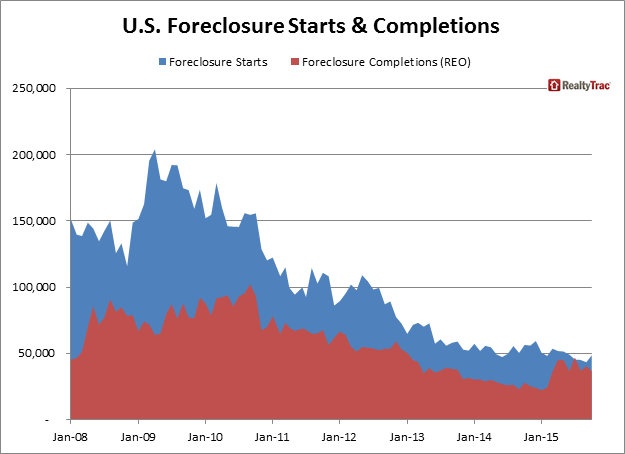 While this increase isn’t a giant surprise, it did exceed expectations.

“We’ve seen a seasonal increase in foreclosure starts in October for the past five consecutive years, so it’s not too surprising to see the monthly increase this October,” said Daren Blomquist, vice president at RealtyTrac.

“However, the 12% increase this October is more than double the average 5% monthly increase in the past five Octobers, and the even more dramatic monthly increases in some states is certainly a concern. The upward trend in foreclosure starts in those states in some cases could be an indication of fissures in economic fundamentals driving more distress and in other cases is more likely an indication of long-term delinquencies finally entering the foreclosure pipeline,” he added.

New Jersey accounted for 7,559 properties receiving a foreclosure filing in October, a foreclosure rate of one in every 471 housing units. While the state’s foreclosure activity is down 4% from the previous month, it is still up 87% from a year ago.

Recently, Sens. Cory Booker, D-NJ, and Robert Menendez, D-NJ, sent a letter to the heads of the Department of Housing and Urban Development, the Federal Reserve Board, the Consumer Financial Protection Bureau, the Federal Housing Finance Agency and others, saying that the prevalence of zombie foreclosures in the state is seriously impacting the state’s residents and its economy, and they want to know what the federal regulators are going to do about it.

Check here for what their frustrations were.

Brace yourself for the riskiest week in wire fraud

Ready for the riskiest week for wire fraud? As if the threat of wire fraud wasn’t already high enough this year, the situation is likely to get much worse before it gets better. HW+ Premium Content