Trending Thursday is a roundup of the stories shaping the week and what’s yet to come through the weekend — also taking into account social media reaction. Think of it as a midweek Monday Morning Cup of Coffee, but with extra caffeine.

Want a cold dose of worry as a chaser to the good headline numbers on September existing-home sales?

Here you go, courtesy the Wall Street Examiner — the Federal Reserve has created a chronic housing crisis that has no exit or end. 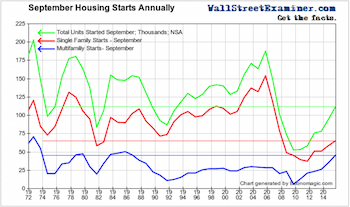 This can only leave us to wonder what would happen if mortgage rates were to actually materially rise. You can bet that the Fed is wondering the same thing.

Speaking of today’s existing-home sales report, it is giving everyone a moment’s respite from the aforementioned worry.

Lindsey Piegza, chief economist atStiffel Fixed Income, joined the praise, but as usual she was too careful to get caught up in the cheerleading.

“After a sizable decline in August, home sales are back on track, continuing a steady – and welcome – upward trajectory,” she said. “Against the backdrop of waning employment and nonexistent inflation, the US housing market appears to be the sole silver lining in the recovery as of late.

“The housing market, however, while a positive contribution to headline activity, will not be enough to propel the economy beyond this stagnant 2% growth pace,” she said.
Mortgage applications may be up as of yesterday, but the numbers don’t tell the whole tale.

Anthony Sanders at Confounded Interest peers behind the curtain and the distinguished professor of finance is concern trolling about what he sees.

According to the Mortgage Bankers Association, the Refinance Index NSA decreased 2 percent from the previous week and remain relatively stagnant following the 2013 surge in mortgage and Treasury rates.

The House Financial Services Committee is taking a step back from the usual day-to-day and looking at the whole of housing policy in hearings today, in addition to hearings on it yesterday.

It’s part of the committee’s year-long examination of the Department of Housing and Urban Development during its 50th anniversary year.

Yesterday the Housing and Insurance Subcommittee held a hearing, and today it’s the full committee.

Part of that was consideration of H.R. 3700, the “Housing Opportunity Through Modernization Act of 2015” introduced by Subcommittee Chairman Blaine Luetkemeyer, R-Mo.

H.R. 3700 is a bipartisan bill that reforms certain HUD and Rural Housing Service programs in order to improve their effectiveness and provide enhanced opportunities for beneficiaries and the organizations that serve them. The bill streamlines the inspection protocol for rental assistance units, simplifies the income recertification policies for all assisted households, modifies Federal Housing Administration requirements for mortgage insurance for condominiums, delegates rural housing loan approval authority, and provides limited flexibility between public housing operating and capital funds.

“In its history HUD has clearly achieved good. It has made commendable progress to aggressively fight immoral and illegal racial discrimination in housing,” Hensarling said. “In fact, poverty levels are largely unchanged since HUD’s creation. With some notable exceptions, HUD’s public housing projects are typically any city’s most despairing places, where generations of poverty stricken families are warehoused and sealed off from the best schools, best job opportunities and the safest neighborhoods.

“We can no longer measure success by taxpayer dollars expanded and new HUD programs launched. Measuring success based on how many Americans are standing in line for welfare checks versus earning growing paychecks is a sure sign that the system has failed,” he said. “There can be no real progress in the cause of affordable housing without a recognition that government policies are often the impediment: first, by making housing more expensive, up to 30% according to some studies due to regulatory and zoning restrictions, second by shrinking paychecks and harming economic growth and thirdly by denying educational choice for families to escape failing schools and improve themselves.”

And speaking of affordable housing, next week First American Financial (FAF) will bring together elected officials, business leaders, practitioners and advocates from all sides for an in-depth discussion on how to more broadly facilitate achieving the American Dream for the nation’s Latino and African-American communities.

The “Achieving the American Dream” Leadership Forum will take place on Tuesday, October 27th starting at 11:45 a.m. at the Rayburn House Office Building in Washington, DC.

Finally, a little self-indulgence, so forgive your scribe, but this was one of the funnier things overheard at MBA Annual 2015 this week:

Overheard at #MBAAnnual15 "He's a former nuclear engineer. He helped design TRID." "Oh, is that why it's so toxic?"