Home-price appreciation slowed in August, to plus 0.3% for the Federal Housing Finance Agency’s house price index which is just below the low end of analyst expectations and down from a revised 0.5% gain in July.

Year-on-year appreciation, which had been edging up toward 6% in this report, moved down to 5.5%.

This report is now falling more in line with Case-Shiller data where appreciation has been more modest.

The FHFA HPI is calculated using home sales price information from mortgages sold to, or guaranteed by, Fannie Mae and Freddie Mac. 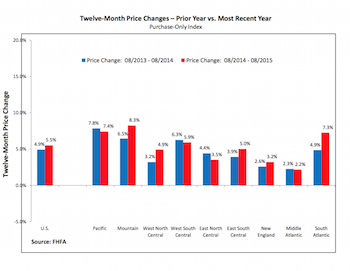 For the nine census divisions, seasonally adjusted monthly price changes from July 2015 to August 2015 ranged from -0.4% in the East North Central and Middle Atlantic divisions to +0.8% in the East South Central division.

The 12-month changes were all positive, ranging from +2.2% in the Middle Atlantic division to +8.3% in the Mountain division.

The CoreLogic HPI Forecast is a projection of home prices using the CoreLogic HPI and other economic variables. Values are derived from state-level forecasts by weighting indices according to the number of owner-occupied households for each state.

Since Rohit Chopra was confirmed as the new director of the CFPB in September, there’s been one particular word on the lips of mortgage executives. And it gives them chills: redlining. HW+ Premium Content