Ocwen Financial (OCN) failed four metrics in the second half of 2014, according to a new report filed by Joseph Smith, monitor of the National Mortgage Settlement, with the United States District Court for the District of Columbia.

The report provided the results of Smith’s latest testing of Ocwen Financial Corporation’s compliance with the NMS on the company’s entire loan portfolio for the third and fourth quarters of 2014.

Along with the failed metrics, Smith and Ocwen agreed that several metrics with timeline requirements would be deemed failures.

These deemed failures are part of Ocwen’s Global Corrective Action Plan to address previously reported issues with incorrect dates on correspondence to borrowers.

In all, 10 metrics are subject to corrective action plans after the fourth quarter 2014.

“The Monitor’s report confirms continued confidence by the OMSO in the changes we have made to our Internal Review Group function, the qualifications and process around our metrics testing, and discusses our state of compliance with the National Mortgage Settlement," Ocwen said in a statement.

The servicer added, "The specific metrics mentioned in this report are from the third and fourth quarters of 2014, and not a reflection of our current operations. They have all been addressed with Corrective Action Plans approved by OMSO and implemented by Ocwen in 2015. We also note that the Monitor’s report specifically discusses that Ocwen has cured its potential violation regarding termination of lender-placed insurance and passed that metric during the cure period in the fourth quarter of 2014."

The chart below shows which metrics were either fails in the second half of 2014 and/or deemed a fail under the Global CAP. 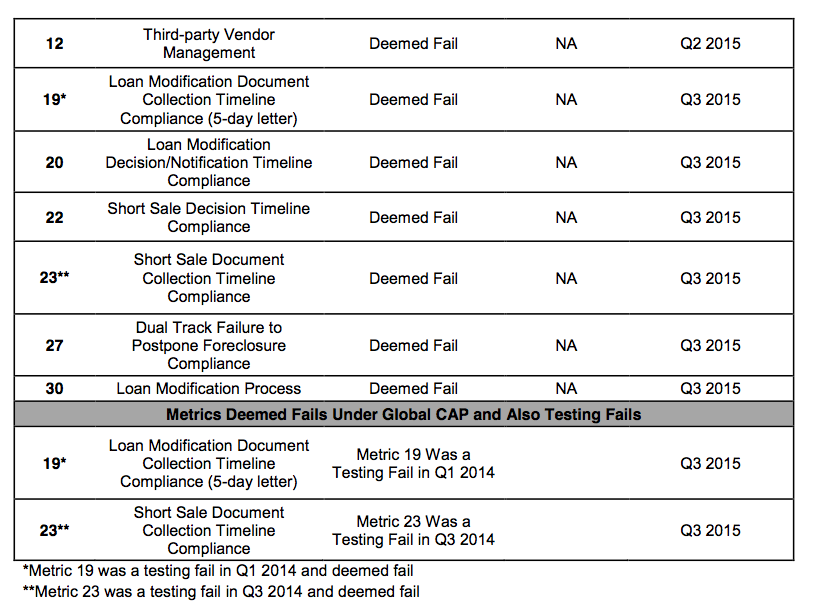 “Ocwen still has work to do,” Smith said. “I anticipate that Ocwen will complete its corrective actions later this year or in early 2016. I will report the results of my reviews in my next report, which will also cover compliance for the first and second quarters of 2015.”

"Ocwen is committed to being fully compliant with all rules and regulations related to our business, and we continue to invest in our risk and compliance management systems. We will continue to work closely with the Monitor and look forward to the next report,” the company said.

The news follows what appeared to be positive news for the servicer back in August that it was almost in the clear with the National Mortgage Settlement after more than a year of scrutiny due to problems with the servicer’s Internal Review Group.