As of the end of the second quarter of 2015, CoreLogic reports an 8.9% year-over-year decrease in fraud risk, as measured by the Mortgage Application Fraud Risk Index.

For the twelve months ending the second quarter 2015, the report estimates the total value of applications with fraud or serious misrepresentations at $17.3 billion, as compared with $19.8 billion a year ago.

“New regulations, like Qualified Mortgage (QM) and Ability to Repay (ATR), as well as stricter credit overlays, have resulted in greater scrutiny of mortgage applications. Greater scrutiny, in turn, has had a positive impact on the rate of fraudulent applications,” said Susan Allen, senior vice president of mortgage analytics at CoreLogic. “In the markets where fraud remains strong, there are also significant inventories of distressed properties. Typically, this leads to large value discrepancies with nearby properties, which increases the risk of incorrect valuation, fraud-for-profit schemes, and occupancy fraud on properties recently converted to rentals.” 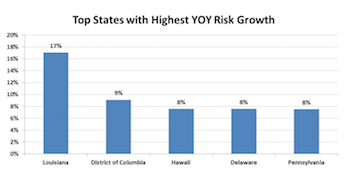 Among the highlights of the report:

The state with the highest year-over-year growth in mortgage application fraud risk was Louisiana at 17%; Kansas had the largest decline at 35.2%.

Of the six components in the CoreLogic Mortgage Application Fraud Type Indexes, undisclosed mortgage debt risk showed the only increase at 1.7%; identity risk had the largest year-over-year decline at 22.7%.

As has been the case for the past five years, jumbo mortgages have exhibited the highest fraud risk, followed by low-down payment mortgages.

Blend announced Wednesday it has raised a $75 million Series F round at a valuation of nearly $1.7 billion, making it officially a unicorn.