The status of the rental market is buried beneath two seemingly different market indicator measures.

However, after a little digging, a new Capital Economics report discovered that the rental market is not as tight it seems.

The report examines two industry measures to answer the question: So how tight are conditions at the moment?

According to the rental vacancy rate, which measures the share of the rental inventory that is on the market but has yet to secure a tenant, the answer would seem to be very tight.

“In the second quarter of this year, the rate dropped to just 6.8% – the lowest reading since the end of 1985. In other words, households seeking a new rental home are chasing the lowest share of available properties for 30 years. That would imply rental growth is set to accelerate sharply over the next year,” the report stated.

Each quarter, the National Multifamily Housing Council asks its members whether market conditions have tightened over the past three months. A tight market is defined as one with low vacancies and high rental growth.

In the third quarter, the index increased to 61, which is above the level of 50, signifying that the market is getting tighter.

However, a reading of 61 is not particularly high – it exceeded that level for six consecutive quarters from the middle of 2010. 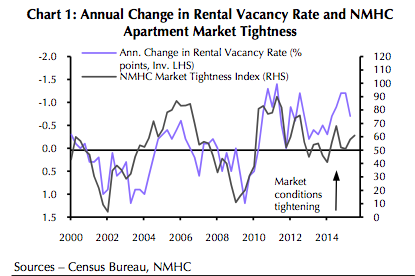 So which is it?

The report said it suspects the rental vacancy rate is currently overstating the true level of market tightness.

The reason: A surge in the share of homes, which are vacant, but held off the market.

Since the houses are not available to rent or buy, these homes are excluded from the rental vacancy rate calculation. 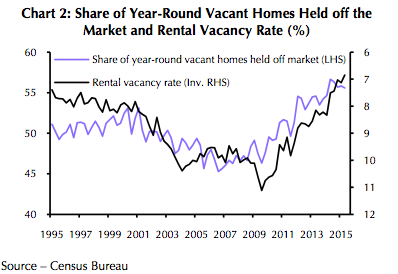 However, the report explained, “a closer look suggests much of this increase is down to a rise in owners who have delayed selling or renting an empty property.”

“In these cases, it seems likely that the owners are waiting for conditions to improve before they market their property. Therefore, as market conditions tighten and rents and prices rise, that should trigger an increase in supply from these reticent owners, which will then act to prevent a rapid acceleration in rental growth,” the report stated.