Zillow Group’s (Z) two portals — Zillow.com and Trulia.com — get more traffic than realtor.com, but Zillow Group sites have fewer listings in most markets, and the two are losing ground in traffic.

That’s the finding of a lengthy study by BuildZoom.

And while Zillow has been increasing its total number of listings, it may not be able to close the gap if its current pace is any measure. Zillow, for its part, disagrees and argues its listing are growing weekly, and will do so for some time.

Right now, Zillow and Trulia together dominate the market in terms of traffic, but realtor.com recently surpassed Trulia to become the second most popular portal, according to the BuildZoom chart below. 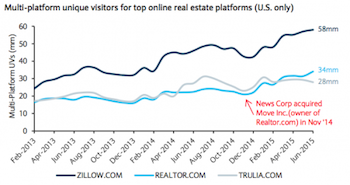 Another difference is the sites are not equal in the quality of listings, nor do they have equal coverage in major metros, BuildZoom says.

BuildZoom.com Chief Economist Issi Romem has been looking at the question since April after ListHub pulled its contract with Zillow Group, and his findings seem to suggest that realtor.com is correct on quality in many markets.

“…(T)he number of listings being provided still varies widely from city to city. According to comScore, Zillow and Trulia combined attract far more web traffic than Realtor.com,” Romem says. “However, since News Corp (NWSA) acquired realtor.com the number of unique visitors to that site has steadily grown.”

Romem says that depending on the market, the portal buyers choose to search may be more important than they realize. realtor.com has an advantage despite getting less traffic than Zillow Group’s combined sites, he says.

“Before its recent acquisition by News Corp, realtor.com operator Move, Inc. had a 10-year head start, backed by the National Association of Realtors,” Romem says. “This advantage has translated into the realtor.com site having more timely, accurate and comprehensive nationwide listings. This is a result of receiving and updating data from almost all of the 800+ multiple listing services in the U.S. every 15 minutes.”

He says that the discrepancy between the number and quality of listings available on the Zillow Group portals and on realtor.com attracted a great deal of attention in April, when ListHub — a key aggregator of MLS data, now controlled by News Corp — terminated the contract, and stopped providing listing information to Zillow Group.

“In anticipation of the event, Zillow Group scrambled to negotiate its own agreements with individual MLSs to obtain listings which it had previously obtained from ListHub. By mid 2015 Zillow Group had signed agreements with just over 300 MLSs,” BuildZoom's Romem says. “We tracked the overnight change in the number of listings on the different portals after ListHub’s agreement with Zillow Group expired. Since then, we have kept track of the listing coverage for the core cities of the 51 largest U.S. metro areas.”

The lighter blue shade in the chart below is Sept. 21, and the darker is April 15. For each city, the bar shows the percentage of listings Zillow had at each time period studied as share of what realtor.com had listed. So in metros like Birmingham, Alabama, there was little gain in listings for Zillow, but in metros like Raleigh, North Carolina, and Las Vegas, for instance, Zillow gained a significant amount.

According to the chart, as of Sept, 21, Zillow.com has fewer listings than realtor.com in 42 out of 51 cities.

“While this may indicate the absence of some listings on realtor.com, it may also reflect data quality issues in Zillow’s database, such as incorrect listing details, or duplicate or expired listings,” Romem says. “We encourage readers to compare listings in these cities and form their own opinions.”

What that means is Zillow Group's "excess data," he said, is likelier to come from non-MLS sources whose reliability is less certain.

Katie Curnutte, vice president of communications and public affairs at Zillow Group, disagreed about the quality of Zillow’s listings.

“Zillow now obtains all listings directly from MLSs or brokers, and our listing count is growing weekly,” she said in a statement to HousingWire. “We continue to add partnerships, and expect this to continue for some time.”

Romem argues that at least superficially, the numbers appear to support realtor.com’s claim of having superior data.

Which raises the question: Does realtor.com’s advantage matter for Zillow Group?

“As long as Zillow Group continues to draw substantially more traffic than realtor.com, agents and brokers will continue to feel compelled to advertise on its portals,” he says. “As a result, Zillow Group’s revenue is less sensitive to its listing coverage as one might think. Yet the danger remains that consumers will eventually recognize the discrepancy and flock to realtor.com or elsewhere in search of more comprehensive and accurate listings. If this happens, agent and broker dollars will follow.

“Going forward Zillow Group has the ability to close the listing gap as it continues to sign additional local MLS agreements, but will it succeed?” Romem asks. “Judging by its limited progress on this front between April and September — it is destined for an uphill battle.”

On Friday, Zillow sent an order to cease-and-desist order to BuildZoom in response to the information contained in BuildZoom's study.

Zillow is trying to grow beyond online listings, positioning itself to try to take the lead in the online transaction revolution with such moves as its recent acquisition of DotLoop.

The company had a profitable second quarter, with Zillow Group reporting that its revenue increased 20% to $171.3 million from pro forma revenue of $142.8 million in the second quarter of 2014.

This exceeded the high end of the company's outlook by $2.3 million, along with beating analyst revenue expectations by $2.58 million. Excluding market leader revenue, revenue increased 25% to $158.7 million from $126.8 million in the second quarter of 2014 on a pro forma basis.