Last year’s inaugural list of the 50 fastest-growing companies in the housing economy stunned us with an average revenue growth of nearly 234%. This year’s winners posted a much more sustainable but sedate rate of 39% growth year over year. So should the hand-wringing and nay-saying commence? Is the future full of doom and gloom for housing? Not at all.

Battling regulatory restrictions and a still-lagging economy, the companies on this list represent the resurgence of the housing economy amid significant roadblocks.

The darlings of 2014, the single-family housing investment and rental businesses, didn’t dominate like last year, but they still had a strong showing. After snagging four of the top five spots on the 2014 HW Fast50, two SFRs placed in the top five in 2015 and three made the top 50.

Posting staggering revenue growth isn’t exactly uncommon for relatively new, well-run companies, but it’s worth noting that these two mortgage insurers are definitely starting to grab a chunk of the market from more established competitors. One such industry veteran is Radian Group, which was no slouch this year, coming in at No. 16 on the Fast50 with growth of 43%. 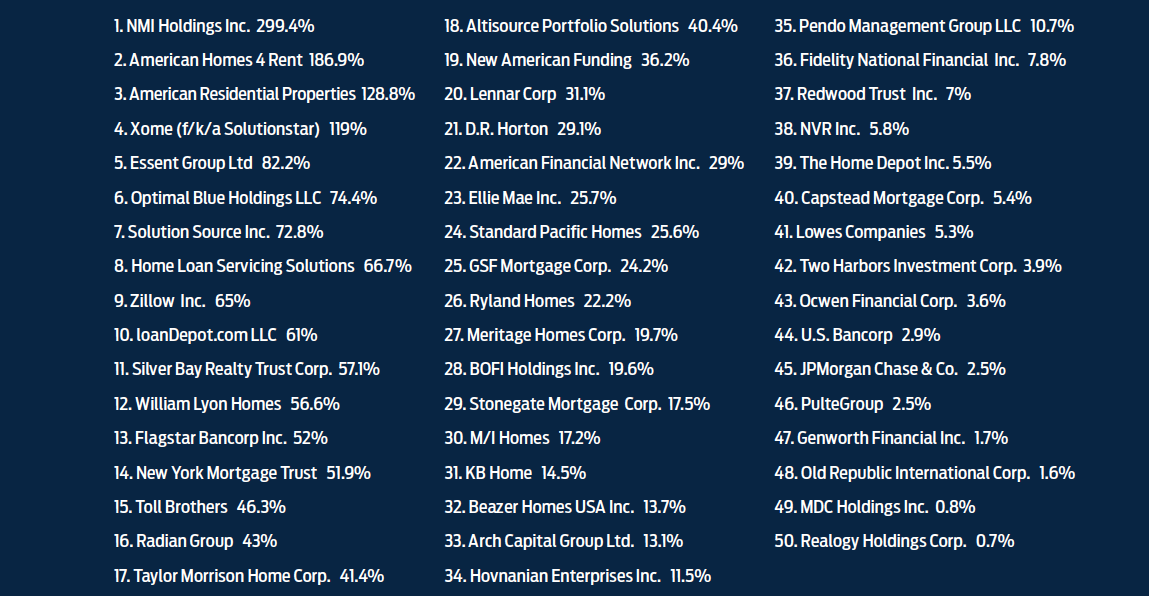 But NMI and Essent have an advantage over Radian and other industry vets because they didn’t start operations until after the financial crisis of 2008. Mortgage insurers operating during the crisis continue to suffer legacy issues on their books arising out of the Great Recession, making strong growth a tricky proposition.

Meanwhile, it may not rival the tech bubble around the turn of this century, but technology companies also made a bit of a splash in the 2015 HW Fast50. Three of the top 10 companies hail from the technology industry, which didn’t  register a single top-10 company in 2014.

Xome, the technology and real estate services subsidiary of Nationstar Mortgage Holdings Inc., was tops among the tech companies on the list. It came in at No. 4 with growth of 119%. Optimal Blue and Zillow also cracked the top 10 with growth of 74.4% and 65%, respectively. Click chart to enlarge, below. 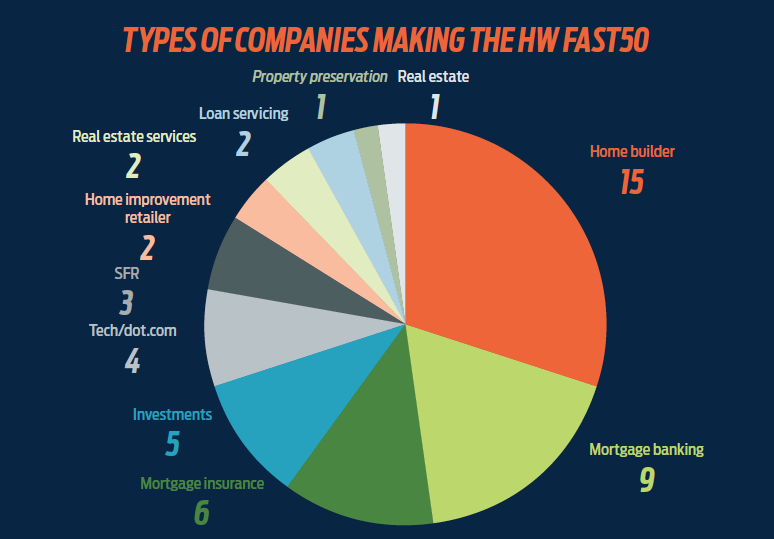 The four total technology firms on the Fast50 averaged year-over-year growth of 71% in 2014, nearly double the mean growth of the entire Fast50.

Homebuilders increased their share of the Fast50 from 2014 to 2015, with the total number of builders that cracked the list inching up to 15 from 13 a year ago.

As was the case in 2014, the rankings are sprinkled with a wide variety of housing economy companies, including mortgage insurers, investors, loan servicers, real estate services companies, mortgage bankers and even home improvement retailers. 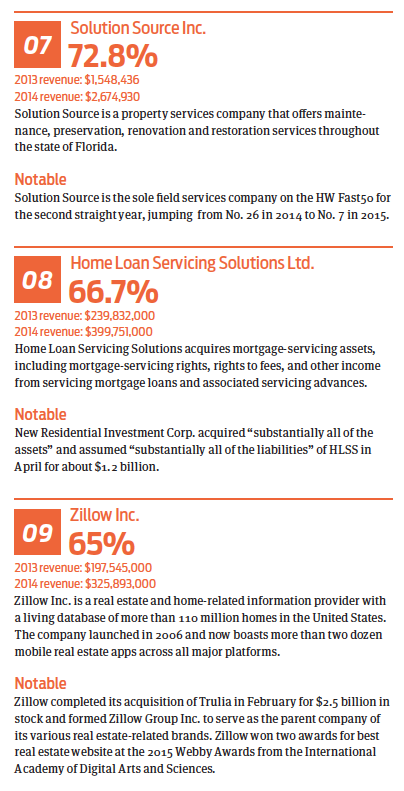 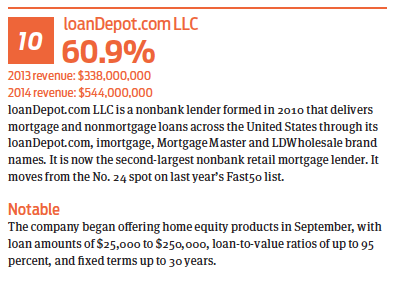 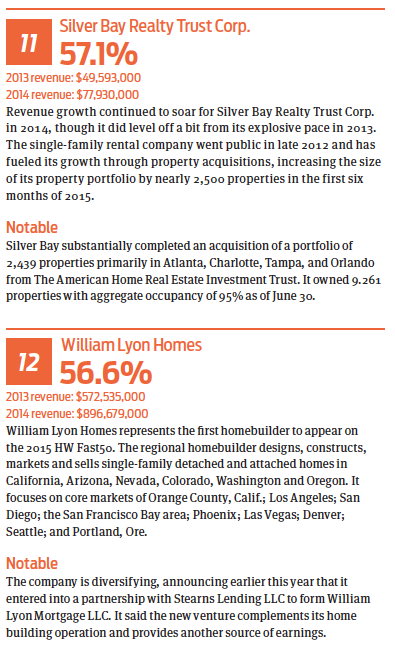 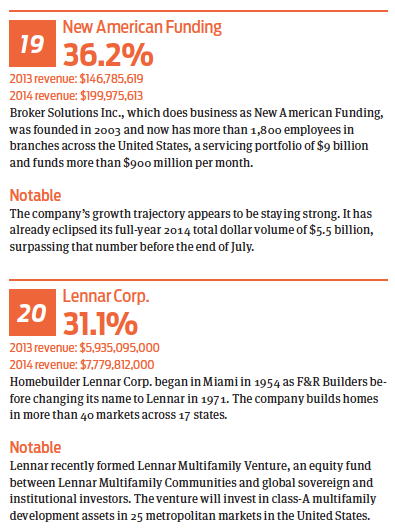 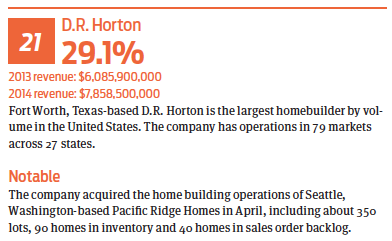 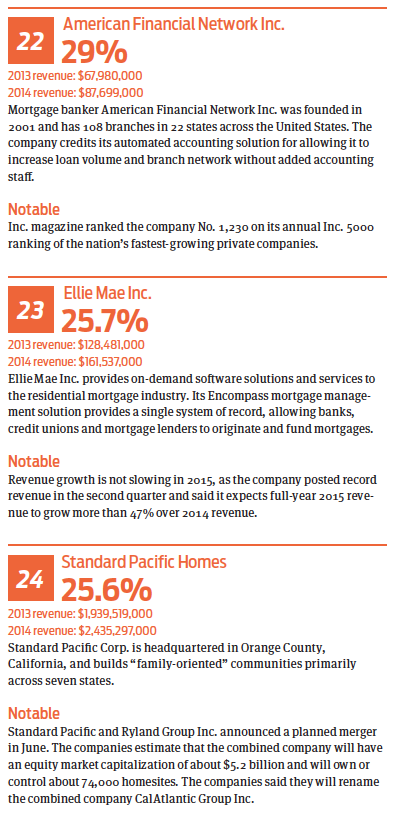 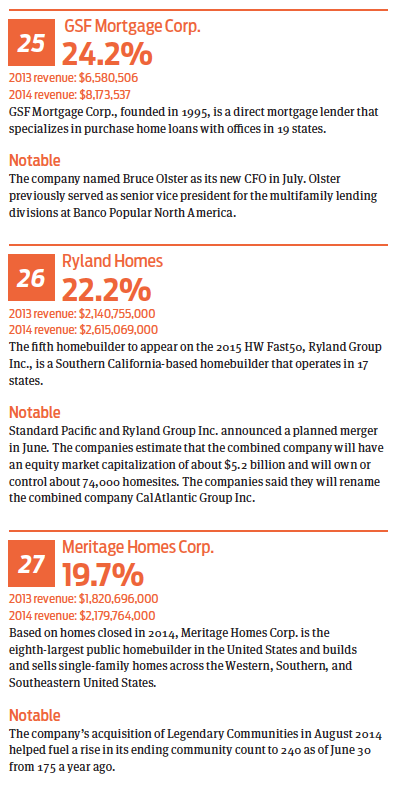 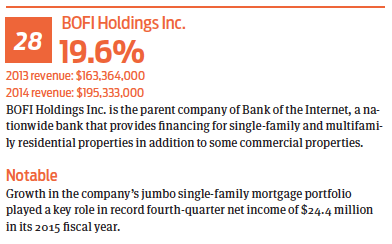 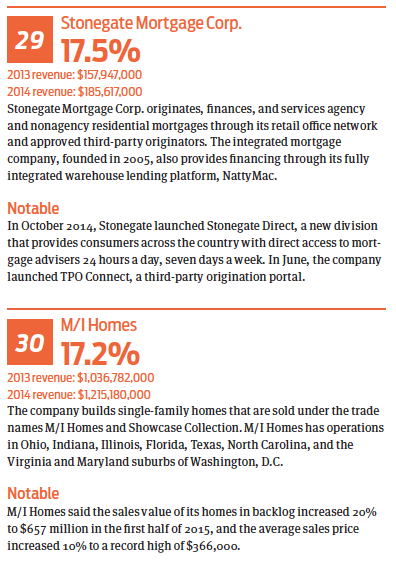 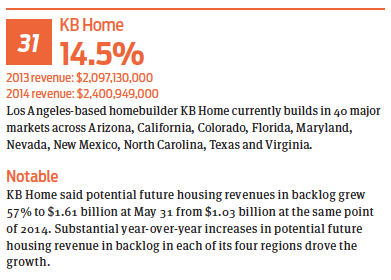 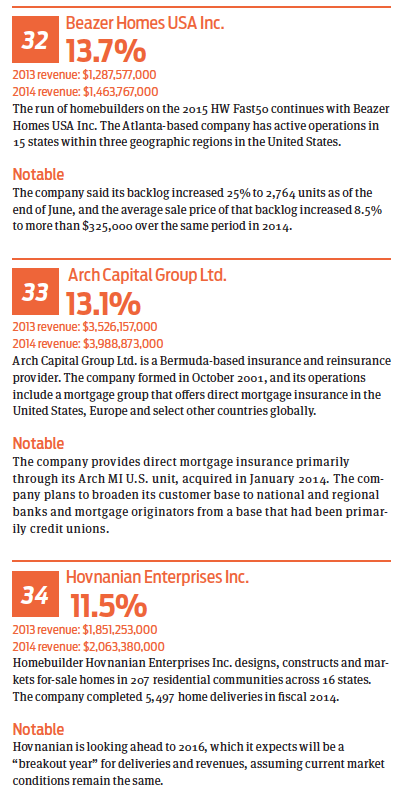 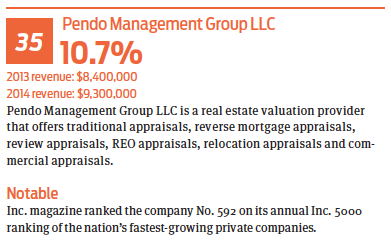 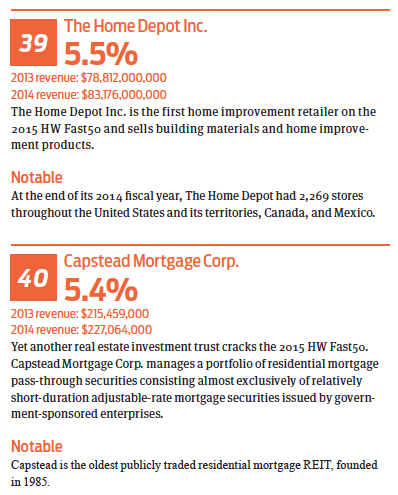 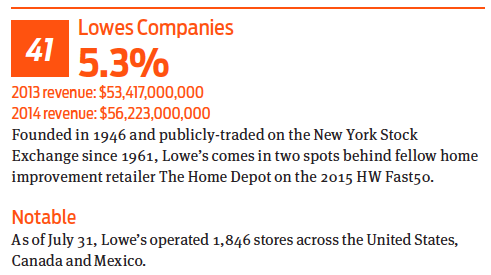 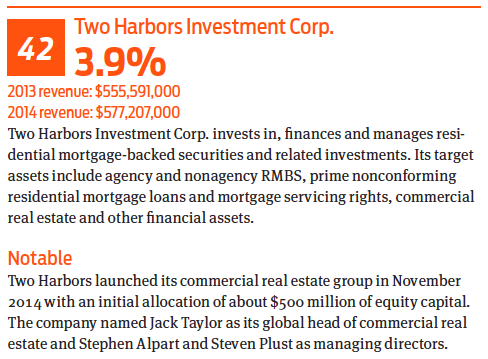 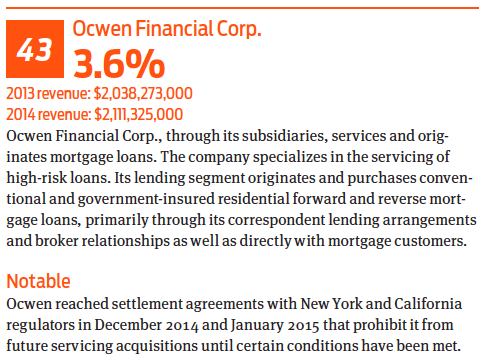 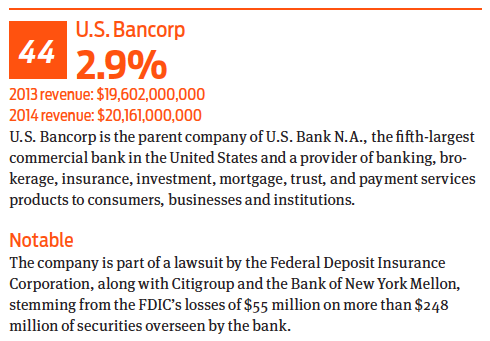 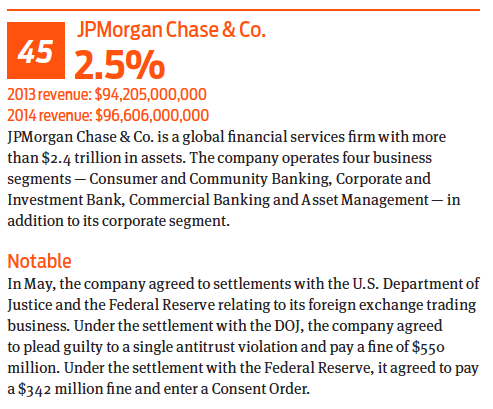 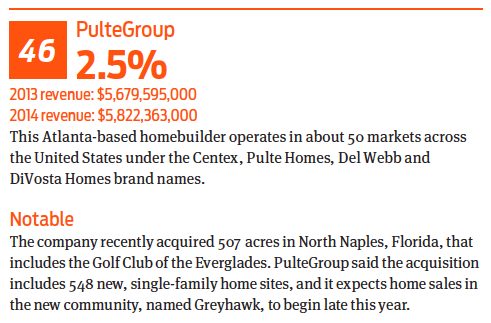 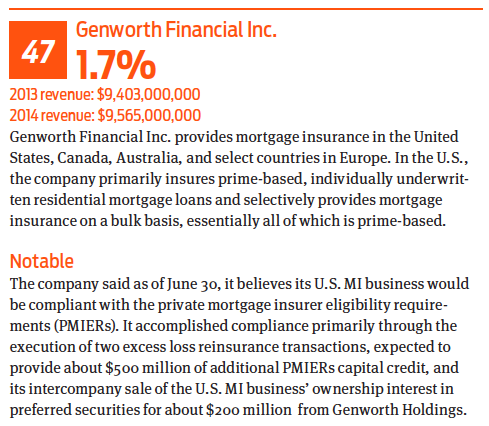 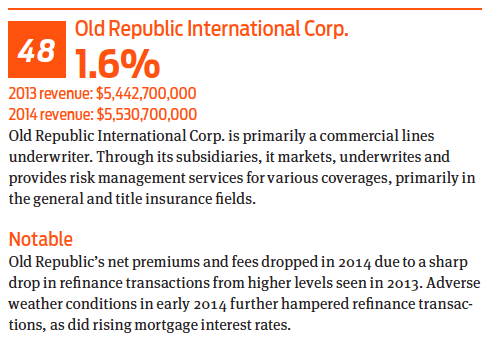 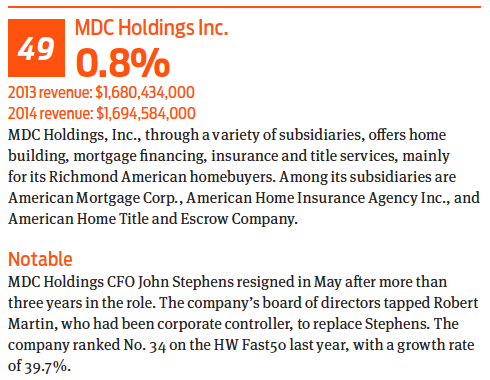 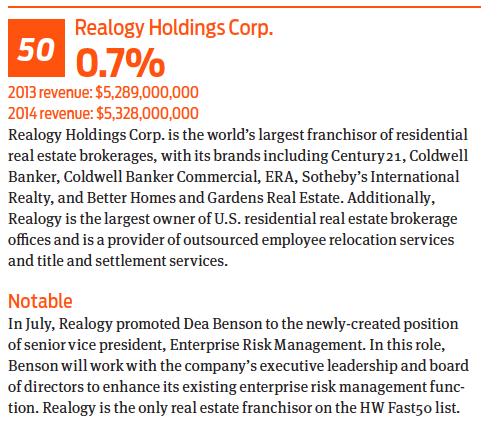