With month-over-month declining prices and increased time on market, the September housing market has transitioned into a buyer’s market, according to realtor.com’s ‘Advance Read of September Trends.’

This means that it is now easier for buyers to purchase a home than it has been any time so far this year.

“The spring and summer home-buying seasons were especially tough on potential buyers this year with increasing prices and limited supply,” said Jonathan Smoke, chief economist for realtor.com. “Buyers who are open to a fall or winter purchase should find some relief with lower prices and less competition from other buyers. However, year-over-year comparisons show that fall buyers will have it tougher than last year as the housing market continues to show improvement.”

Housing demand is in its seasonally weaker period and as a result, median list prices are continuing to decline from July’s peak. Likewise, inventory has also peaked for 2015, so buyers will see fewer choices through the end of the year.

Top line findings of the monthly report that draws on residential inventory and demand trends over the first three weeks of the month include:

Here are the 20 hottest markets in the country, ranked by number of views per listing on realtor.com and the median age of inventory in each market, in September 2015. 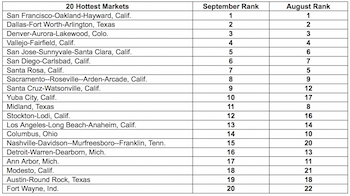 California maintains 11 cities on the Hotness Index due to continued tight supply and turbo charged economy. Markets in the state have been characterized as having extremely tight supply all year, so frustrated buyers who have not been able to find a home so far remain active, supporting continued strength in sales across much of Northern and Southern California.

Texas and Michigan also continue to feature multiple markets also driven by job growth, but compared especially to the California markets have more affordable inventory attracting a broader base of potential buyers.

Fort Wayne, Ind., and Modesto, Calif., both entered the top 20 list in September having just missed in August. Both markets benefit from strong housing affordability for their regions.

“The hottest markets are little changed in September as supply remains tight and demand remains strong,” Smoke said. “Sellers across all these markets continue to see listings move much more quickly than the rest of the country in September, and the seasonal slow-down is not as strong in these markets.”