The S&P/Case-Shiller U.S. National Home Price Index recorded a slightly higher year-over-year gain with a 4.7% annual increase in July 2015 versus a 4.5% increase in June 2015.

“To many observers, the housing market is sending mixed messages right now. Median home values overall continue to grow at a modest clip, but many individual homes have actually lost value in the past year,” says Zillow (Z) Chief Economist Dr. Svenja Gudell. “Sales of existing homes took a step back recently, despite new home sales being the highest since early 2008. For-sale housing is still very affordable in many cities across the country, however on the ground conditions are often difficult, especially for first-time homebuyers.

“These conflicting trends may be confusing and even frustrating for some, but right now they shouldn’t be too much cause for concern. The market is continuing to heal and find its footing in a new environment, one where highly local factors – including local job opportunities, household formation and income growth – matter more in local markets than national trends,” she says.

The monthly gain in the S&P is higher than Black Knight’s (BKFS) reading from Moday, which measured monthly price gain in July at 0.4%. 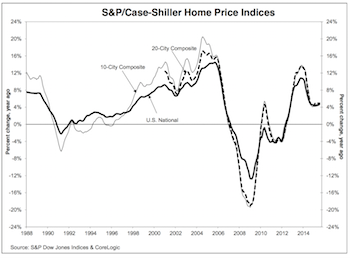 “Prices of existing homes and housing overall are seeing strong growth and contributing to recent solid growth for the economy,” says David Blitzer, Managing Director and Chairman of the Index Committee at S&P Dow Jones Indices. “The S&P/Case Shiller National Home Price Index has risen at a 4% or higher annual rate since September 2012, well ahead of inflation. Most of the strength is focused on states west of the Mississippi.”

“While the stabilization of prices at the national level is positive for prospective buyers; however, the variation in price appreciation across price tiers remains dramatic – especially in the lower price tier,” says Trulia Chief Economist Selma Hepp. “This spells trouble for many first-time homebuyers who tend to gravitate towards more affordable homes.

“At the lower price tier, home price growth is stronger in seven of the 17 metro areas being tracked by Case-Shiller, including Denver at 16% annual growth, Tampa at 16%, Atlanta at 12%, and San Francisco, Miami and Portland at 11%. Each of these metros reported double-digit price appreciation,
she said. “The lower price tier is growing relatively higher than the other price tiers, at almost 9% annual growth.”

The Sunbelt cities – Miami, Tampa, Phoenix and Las Vegas – which were the poster children of the housing boom have yet to make new all-time highs. 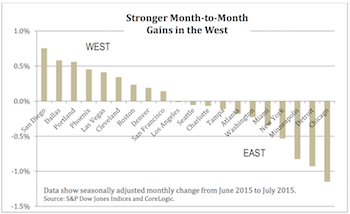 San Francisco and Denver are the only cities with a double digit increase, and Phoenix had the longest streak of year-over-year increases. Phoenix reported an increase of 4.6% in July 2015, the eighth consecutive year- over-year increase. Boston posted a 4.3% annual increase, up from 3.2% in June 2015; this is the biggest jump in year-over- year gains this month. 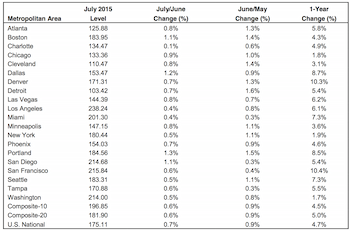 “The economy grew at a 3.9% real annual rate in the second quarter of 2015 with housing making a major contribution. Residential investment grew at annual real rates of 9-10% in the last three quarters, far faster than total GDP,” Blitzer says. “Further, expenditures on furniture and household equipment, a sector that depends on home sales and housing construction, also surpassed total GDP growth rates.

“Other positive indicators of current and expected future housing activity include gains in sales of new and existing housing and the National Association of Home Builders sentiment index. An interest rate increase by the Federal Reserve, now expected in December by many analysts, is not likely to derail the strong housing performance,” he says.