Black Knight Financial Services’ home price index report for July 2015 shows that home prices were up 0.4% for the month, rising 5.3% on a year-over- year basis. 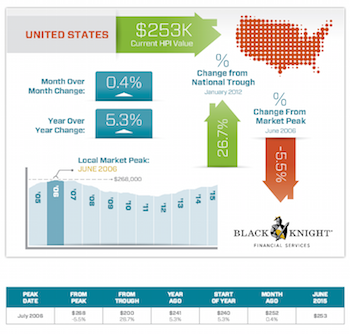 New York led gains among the states, seeing 1.4% month-over-month appreciation, followed by Hawaii and Florida, both of which gained at 0.8% from June. New York State metros also accounted for 7 of the top 10 best performing metro areas.

Among the nation's 20 largest states, 4 hit new peaks in April: 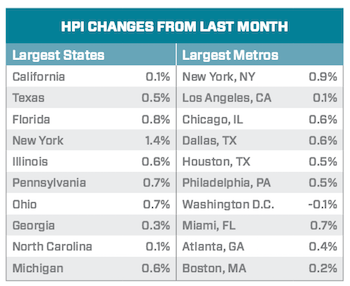 Washington state home prices rose by 8.4% since this time last year, marking the largest year-over-year growth among the 20 largest states.

San Jose and San Francisco have seen the largest year-to-date home price growth among the nation’s 40 largest metro areas, rising 12.7 and 11% respectively since the start of 2015.

Apple announced that it is allocating more than $400 million toward affordable housing projects and homeowner assistance programs in California this year.