The number of homes nationwide losing value on a monthly basis has more than tripled over the past year while the number of appreciating homes has fallen more than 12%, according to Allan Weiss, CEO of Weiss Residential Research.

Depreciating homes increased from 7.6% to 23.4% while the number of appreciating homes has fallen from 65.2% to 56.8%, according to an analysis of July data from “canary homes” that are indicators of price trends in Weiss Residential Research’s databases of nearly 100 million homes.

“While a majority of homes nationwide is still gaining value, the national trend is clearly downward.  With the decline in year over year prices in the existing home sales report released today by the National Association of Realtors, even the national median price reports are picking up on the trend, reflecting the growing of numbers homes that are changing from appreciation to depreciation,” Weiss said.

“In this environment buyers and investors should be careful to avoid buying properties that are losing value by reviewing metro and Zip code maps on Owners.com that show hyper-local trends in changing value,” he said.

Even seven of the top ten Metro markets with the highest levels of appreciation in July saw a year over year decline in the percentage of homes gaining more than 1.5%.

Reno, Nevada leads the nation in appreciating properties in July, with more than 91.4% gaining value on a monthly bases, though 93.7% were appreciating a year ago.

Western and West Coast markets dominate the list of markets with the highest percentages of appreciating properties. 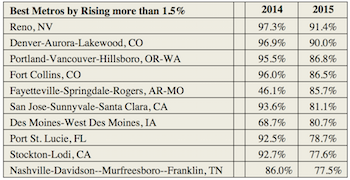 Fayetteville, NC tops the list of the nation’s ten worst metros in terms of the percentage of properties gaining value on a monthly basis in July.  Its percentage of appreciating homes fell from 22.9% in July 2014 to 18% in July 2015. 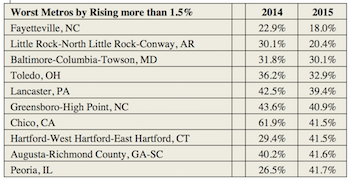