The Community Home Lenders Association shows in a side-by-side chart comparison the growing divergence in both consumer and financial regulations that non-bank lenders and banks face.

The CHLA, which represents non-bank mortgage lenders, has consistently warned that non-bank over-regulation can lead to industry concentration, which hurts consumers and actually increases financial risk.

“The Community Home Lenders Association is releasing a detailed side-by-side comparison to show that non-bank mortgage lenders are subject to more consumer protections than banks and have virtually identical financial and operational regulation by product regulators, including FHA, RHS, VA, Ginnie Mae and FHFA,“ said Scott Olson, CHLA executive director.  “We are releasing this comparison to dispel myths and misperceptions held by some in the press and some in Congress that non-bank mortgage lenders are not adequately regulated.”

The comparison takes place as non-bank lenders have significantly increased their share of mortgage lending in the last few years, while many banks have exited or reduced the mortgage market. 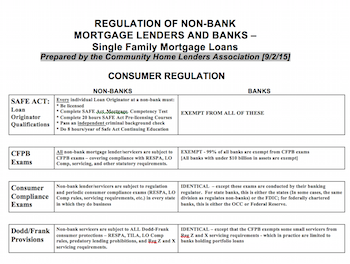 The full document can be read here.

“Going back to last year’s FHFA IG Report, we have heard concerns raised about the adequacy of non-bank mortgage lender regulation,” Olson said. “These concerns are rebutted by the reality of stronger non-bank SAFE Act regulation, broader CFPB oversight, vigorous product regulation of FHA, GNMA, and GSE loans, and supervision by every state that non-bank lenders do business in.”

The comparison highlights a number of important points regarding regulation of non-bank mortgage lenders, including: