Today’s market collapse — the latest in a string of them — is once again hitting the stocks that drive the housing and mortgage finance economy worse than the major indices in early trading.

Fidelity National Financial (FNF) was the sole HW 30 component with its head above water, with a 0.07% rise.

Wall Street was expecting volatility today — the New York Stock Exchange once again invoked Rule 48 before trading opened in an effort to speed up and smooth trading at the market open. The 2007 rule means that designated market makers will not have to disseminate price indications before the bell, making it easier and faster to open stocks.

Nationstar Mortgage (NSM), meanwhile, was the biggest bleeder, down 4.83%. 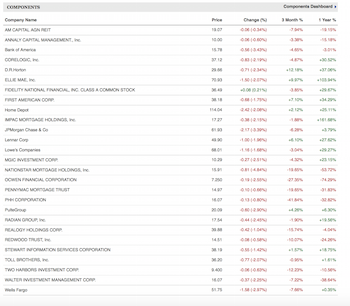 The biggest risk to the housing market right now

What economic factors present the most risk to the housing market for the rest of this year and into 2022? HW+ Premium Content.