The housing market is teetering on the edge of becoming a stable market again, according to the latest Multi-Indicator Market Index from Freddie Mac.

The national MiMi value increased to 80.3, indicating a housing market that is on its outer stable range, while showing an improvement of 1.33% from May to June and a three-month improvement of 2.26%.

On a year-over-year basis, the national MiMi value has improved 5.41%. 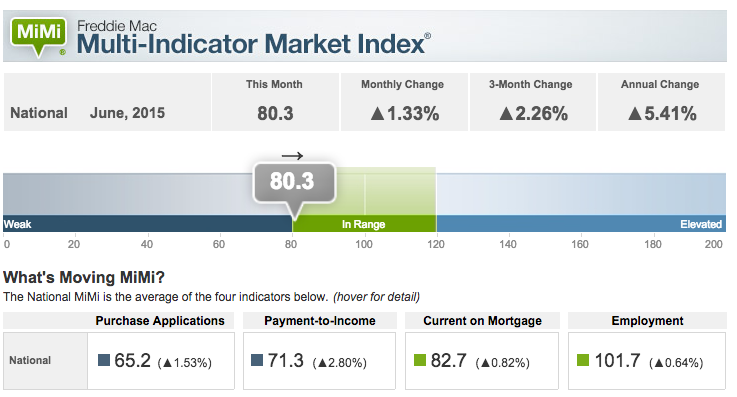 For added perspective, since its all-time low in October 2010, the national MiMi has rebounded 35%. However, it still remains significantly off from its high of 121.7. Furthermore, online listing service Trulia notes longer waiting times for selling, also an indication of a more stabile market.

"Housing markets are the strongest they've been in years with the National MiMi above 80 for the first time since 2008. Nationally, all MiMi indicators are heading in the right direction,” said Freddie Mac Deputy Chief Economist Len Kiefer.

“Robust homebuyer demand has put total home sales on pace for the best year since 2007 and look for that trend to continue as the MiMi purchase applications indicator remains on the upswing. The West has been especially strong, with many markets posting double-digit growth in their MiMi purchase applications indicator compared to a year ago," Kiefer added.

Servicers will now have to offer Covid-19 loss mitigation options to all FHA eligible borrowers who fall behind on their mortgage payments.