The housing market is slowing down, with home values seeing the first negative monthly change since the market began its recovery nearly four years ago, according to the Zillow July Real Estate Market Reports.

Nationally, home value appreciation is leveling off after its rapid pace in the early years of the recovery. Homes lost 0.1% of their value in July, falling to a Zillow Home Value Index of $179,900.

Homes appreciated 3% on an annual basis, down from 3.4 percent in June.

“This slight dip in home values is a sign of the times. Many people didn’t think it was happening, but it is: we’re going negative,” said Zillow Chief Economist Svenja Gudell. “We’ve been expecting to see a monthly decline as markets return to normal. However, this is not like the bubble bust. We’re not going to see 10 percent declines. The market is leveling off, and it’s good news, particularly for buyers, because it will ease some of the competitive pressure.”

Of the 517 metros covered by Zillow, 204 saw a slowdown, including major metros like Washington, DC and Cincinnati, where home values declined month-over-month in July. The slowing appreciation is a sign that the market is returning to normal; economists have expected to see growth flattening out as the recovery continues.

“Nationally, 63% of homes listed for sale on June 17 were still on the market on August 17, which is up a bit from 61% for the same period last year,” says Ralph McLaughlin, Housing Economist for Trulia. “And it turns out homes across all price tiers have slowed about the same.

“Home sales in all three tiers slowed 2-3 percentage points compared with a year ago. The share of low-price and mid-priced homes still on the market after two months increased 2 percentage points, compared with a 3-point increase for high-tier homes. As always though, the national trend hides big differences from one local market to another. In many metros, the sales pace is quickening, while slowing in others,” McLaughlin said.

McLaughlin saidaffordability may be starting to play a role in the priciest markets. Of the 50 most expensive housing markets, those with fewer homes for sale that are affordable to the middle class in 2014 tended to experience a slowdown.

“In other words, home buyers, no matter how competitive the market is, have a limit. When the stock of cheaper homes dries up, not every buyer is able to up their budget and put offers on homes in a higher price tier,” he said. “So some may delay buying a home, which leads to existing homes sitting on the market a tad longer. Still, homes in these expensive markets are moving faster than other less expensive metros.”

Slowing home values could provide more opportunities for hopeful buyers who have been waiting on the sidelines for the market to cool off. More homes may be coming online as homeowners who have been watching strong home value growth decide to list their houses as appreciation slows and smaller gains are expected. This could help ease the constrained inventory the market has been facing for the past several months. 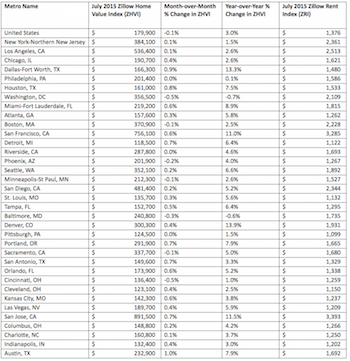 Meanwhile, rents continue to grow at a rapid pace, up 4.2% from last July to a Zillow Rent Index of $1,376. With no sign of rents slowing down and the potential for more homes for sale, conditions may be right for buyers to enter the market.