Home prices continued their rise across the country over the last 12 months, according to the S&P/Case-Shiller Home Price Indices.

“Between Greek default, war, plummeting oil prices and most recently fears of a Chinese slowdown, it’s been a volatile summer. Like swimming with a bully in the pool, it seems like every time the market comes up for air, something comes along and pushes it right back down again,” said Zillow Chief Economist Svenja Gudell. “But even as the market overall has been inconsistent, the housing market in particular has largely remained on the same course – a steady slowdown, with monthly home value growth even turning negative.

"This will have mostly positive impacts on housing and will eventually lead to more inventory and more stable growth. But positive market conditions for housing aren’t the same as positive consumer sentiment, and it will be interesting to see if all this volatility causes consumers to sour and change their home buying and selling behavior,” she said. 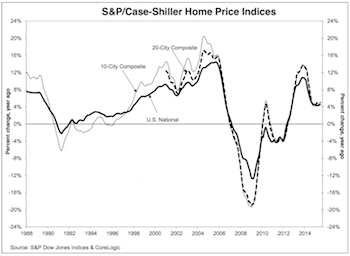 “Nationally, home prices continue to rise at a 4-5% annual rate, two to three times the rate of inflation,” says David Blitzer, Managing Director and Chairman of the Index Committee at S&P Dow Jones Indices. “While prices in San Francisco and Denver are rising far faster than those in Washington DC, New York, or Cleveland, the city-to-city price patterns are little changed in the last year. Washington saw the smallest year-over-year gains in five of the last six months; San Francisco and Denver ranked either first or second of all cities in the last five months. The price gains have been consistent as the unemployment rate declined with steady inflation and an unchanged Fed policy. 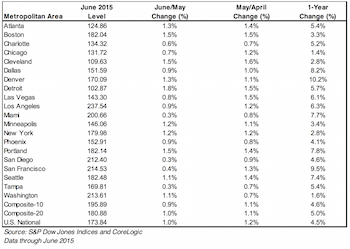 “The missing piece in the housing picture has been housing starts and sales. These have changed for the better in the last few months. Sales of existing homes reached 5.6 million at annual rates in July, the strongest figure since 2007,” Blitzer said. “Housing starts topped 1.2 million units at annual rates with almost two-thirds of the total in single family homes. Sales of new homes are also trending higher. These data point to a stronger housing sector to support the economy.”

Blitzer warned that two possible clouds on the horizon are a possible Fed rate increase and volatility in the stock market. A one quarter-point increase in the Fed funds rate won’t derail housing, he said.

However, if the Fed were to quickly follow that initial move with one or two more rate increases, housing and home prices might suffer. A stock market correction is unlikely to do much damage to the housing market; a full blown bear market dropping more than 20% would present some difficulties for housing and for other economic sectors, Blitzer said.