Home prices rose 0.9% in June from May and 5.1% since June 2014, according to the new home price report from Black Knight Financial Services.

The Black Knight HPI combines the company’s extensive property and loan-level databases to produce a repeat sales analysis of home prices as of their transaction dates every month for each of more than 18,500 U.S. ZIP codes.

Michigan led gains among the states, seeing 1.9% month-over-month appreciation, followed by Colorado at 1.4%.
In a sign of the month’s overall positivity, even the lowest performing state – West Virginia – registered flat, rather than negative, movement in June.

Among all the nation’s metros tracked by the Black Knight HPI, Reno, NV saw the greatest monthly appreciation at 2.6%. 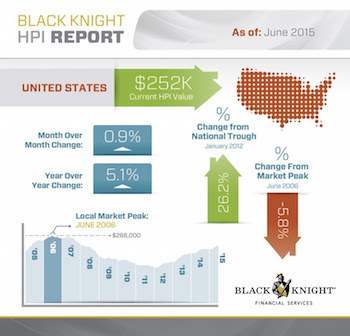 Sierra Vista, Arizona, was the only metro area to mark negative month-over-month movement, with home prices there declining 0.1% from May.
Meanwhile, Indiana, New York, Tennessee and Texas all hit new peaks in June. California home prices have now risen over 50% since the national market bottom.

Among the nation’s largest states, Arizona and Michigan follow, with roughly 39% growth from the trough. As of June, home prices in San Francisco and San Jose are over 70% higher than they were at the market’s bottom. Las Vegas home prices, while up nearly 60% from the national trough, are still almost 40% off their May 2006 peak.

Of the nation’s 40 largest metros, 13 hit new peaks in June:

What could drive mortgage rates in 2021?

Freddie Mac’s David Brickman and Fannie Mae’s Hugh Frater also offered their takes on challenges with affordable housing, racial disparities with homeownership, expectations for 2021 and – yes, you knew it was coming – the 50 bps adverse market fee that’s due to hit lenders doing refis beginning in December.