The national foreclosure rate is down 24%, the lowest since 2007, according to the Data & Analytics division of Black Knight Financial Services.

The company’s “first look” at July 2015 month-end mortgage performance statistics is derived from its loan-level database representing approximately two-thirds of the overall market. ?

According to Black Knight, the inventory of loans in foreclosure continues decline; now at just 711,000 loans.

The delinquency rate improved by 2.2% from June, and is now near post-crisis low.

California saw a 16.4% 6-month reduction in non-current loans and joins Top 5 states in terms of ?improvement.

At just 2.96%, Colorado’s non-current inventory is at the lowest level in over 10 years and the second lowest ?in nation. 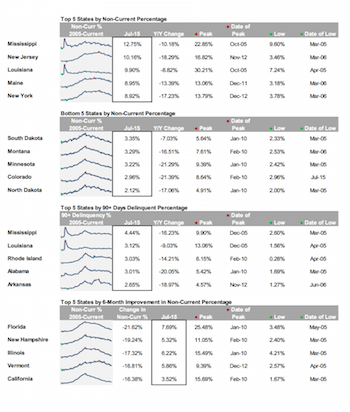 The Consumer Financial Protection Bureau issued a series of orders Thursday that will require large tech companies to hand over information on their payments systems to better understand how these firms manage and access users personal data.