The July market report from Clear Capital shows that trends have been manifesting across price tiers, and it shows that the biggest segment of housing — mid-tier priced homes — is doing the worst.

The Clear Capital HDI measures market appreciation rates across the lowest (up to 25%), middle (26%-75%), and highest (76% and above) priced homes in an area to dissect valuation risk.

Conversely, the mid-tier (homes selling between $120,000 and $345,000) is the worst performing segment with current price levels 24.8% below 2006 peak levels. This vast difference in market recovery underscores the continued challenges the majority of homeowners face, despite a quicker recovery in both the bottom and top segments of the market. 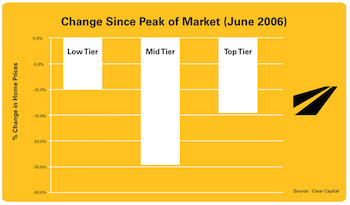 Regionally, we observed a small uptick in quarterly gains in both the West and Midwest, between 0.3 to 0.1 percentage points, respectively; while the Northeast and South remained unchanged over the quarter, at 0.2% and 0.8%, respectively. These minimal changes reinforce housing’s continued moderation and suggest the initial thrust of the home buying season is starting to wane.

Disparity still exists at the local market level. The Northeast reports the widest gap in price performance between the top and bottom performing MSAs with Pittsburgh and Providence at 14.1% and -14.1% year-over-year. 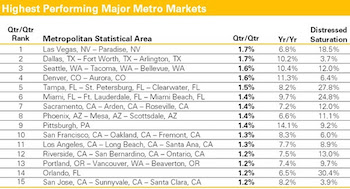 At the national level, our data through July reports a 0.1 percentage point increase in quarterly gains, from 0.6% in June to 0.7% in July. While this minor increase, a carry-over from spring’s performance, is expected as we enter the thick of summer’s peak demand cycle, it reflects the overall contraction from spring’s initial surge.

“Through the first half of 2015, we observed a housing recovery that is normalizing after an impressive price surge from the trough of the market,” says Alex Villacorta, vice president of research and analytics at Clear Capital. “After more than two years of a pretty remarkable upward swing, the housing market’s correction-to-the-correction has given way to more normal rates of growth. What we now know, however, is that this correctionary period has not treated all markets, nor segments within markets, the same. In the present environment, micro analysis is key.

“In particular, our latest data exposed a mid-tier lag. This segment is still way behind both the top and bottom of the market in terms of recovery over the last nine years. When we analyzed the change in home prices since the summer of 2006, we observed that the mid-tier has lagged behind both the upper end and lower ends of the market by a surprisingly wide margin,” he said. “At -24.8% below its peak level, the mid-tier is more than double that of the low-tier at -10.1% and more than 10 percentage points from the top-tier at -14.2%. The low-tier was both hit and buffered by high levels of distressed activity which, in recent years, has sparked investor activity driven in large part by the accelerated demand in the rental sector.”

And, the top-tier has benefited from a segment of the market that is more resilient to the current economic climate. The mid-tier’s performance is concerning as it represents the key move-up buyer segment of the market. As long as this key segment is still fighting to regain an equity foothold, re-engagement back into the purchase market will continue to be on hold, Villacorta said.