The homeownership rate in the United States in the second quarter declined to 63.4%, the lowest it has been since 1967, according to data from the Department of Commerce’s Census Bureau.

Further, the steady decline since 2009 continues. 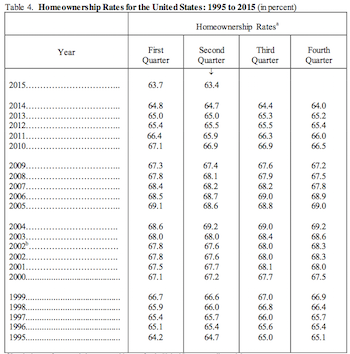 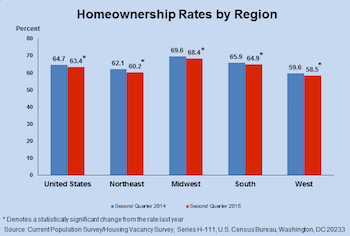 National vacancy rates in the second quarter 2015 were 6.8% for rental housing and 1.8% for homeowner housing.

“The flipside of such strong rental demand is that the homeownership rate fell once again in the second quarter,” said Ed Stansfield, chief property economist at Capital Economics. “This suggests that homeownership has not kept pace with the cyclical rebound in household formation which is now underway, and gives weight to the idea that first-time buyers in particular are still struggling to gain a foothold in the market.

“However, foreclosure rates are declining steadily, employment and incomes are growing at a healthy pace and credit conditions are gradually loosening,” Stansfield said. “What’s more, there is no evidence of a fundamental shift in homeownership aspirations. Accordingly, we expect that the homeownership rate will soon find a floor.”