Despite market reports of strong median home price appreciation this spring, gains are very uneven and nearly half of homes in 10 of the nation’s largest markets actually lost value in May, according to a report by Weiss Residential Research’s Indexes.

On a house-by-house basis, about one-third fewer homes in the largest markets gained value during the heart of the spring buying season this year compared to last.

“Don't be fooled by averages,” said Allan Weiss, founder and CEO of Weiss Residential Research. "All of the largest metro indexes are rising more slowly than they were a year ago, though market reports give the impression that values are rising across the board. However people don’t own the entire market, they own one house.”

In a metro like Washington with a median price increase of 1.2% in the past year according to Case-Shiller, 60% of the houses are rising and the other 40% are stagnant or falling. Since the ones that are appreciating outnumber the ones falling the average is a low positive number, Weiss said.

“The same pattern occurred before the great housing meltdown 10 years ago. The percent of houses rising in D.C. declined from 100% to 60% while the metro index showed a slowdown but did not go negative. Once the population of houses that had been rising fell below 50%, the index began its descent,” Weiss said. 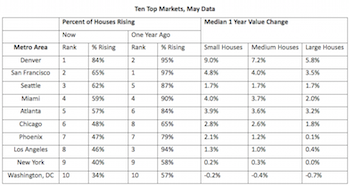 “Today, conditions at the local level may not be as positive as national reports indicate. Every house is unique, has a unique value and responds differently to market changes. In today’s market, sellers should price their homes very carefully and research local conditions to avoid overpricing that could lead to an extended time on market in case prices do decline,” Weiss said.

“In this climate, buyers and investors should be careful to avoid buying a home that is on the verge of losing value,” said Weiss.