Sales activity in the Chicago area reached a new record high, hitting 52,239 units for the first half of the year, the most since 2006 and 9% higher than during the first half of 2014, according to data from RE/MAX.

“We’re seeing a much more robust housing market this year than in 2014 and even 2013,” said Jim Merrion, regional director of the RE/MAX Northern Illinois real estate network.

“A combination of factors is at work – mortgage interest rates remain low, the economy is adding jobs at an encouraging rate and there’s a larger inventory of homes for sale,” Merrion continued.

Additionally, home values continued rising. The median sales price of a home in the metro area climbed 11% during the first half of 2015 when compared to the same period in 2014, coming in at $210,222. This is the highest median sales price recorded for the period since 2008.

“Also contributing to the improved market has been the steady increase in home values over the last few years. That has reduced the number of so-called underwater homes, where the property is worth less than the mortgage balance, and it has allowed many owners eager to relocate to do so,” Merrion said.

The average time required to sell a home increased to 100 days, two days longer than in 2014.

The number of distressed properties, primarily short sales and foreclosures, being sold continued to drop.

“Distressed homes accounted for 44% of all sales during the first six months of 2011. This year, the distressed share of the market was down to 24.5%,” Merrion noted.

Here is a break down of housing in the local markets: 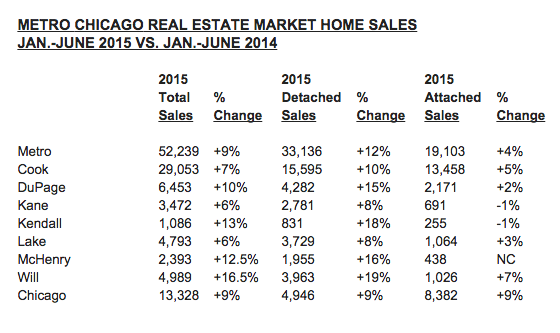 With the July issue focusing on minority homeownership, we wanted to amplify these same people who we have been asking these questions to over the last year.