Despite home sales moving to the best level in eight years, there is one group of buyers not participating in the new growth – foreign homebuyers.

According to a new blog from Frank Nothaft, CoreLogic’s (CLGX) chief economist, relative to the same period one year ago, sales jumped 9%, helped by a drop in fixed mortgage rates of almost one-half a percentage point.

However, according to Nothaft, foreign buyers were absent from this rise.

Nothaft quoted a study from the National Association of Realtors that said that the number of U.S. homebuyers who identified as international dropped to 2% during the first four months of 2015. This is down from 2.5% a year earlier, a 19% decline.

As for why there is a drop, about three-fourths of real estate agents who work with international clients report that changes in foreign exchange rates have a moderate to very significant effect on foreign buying. 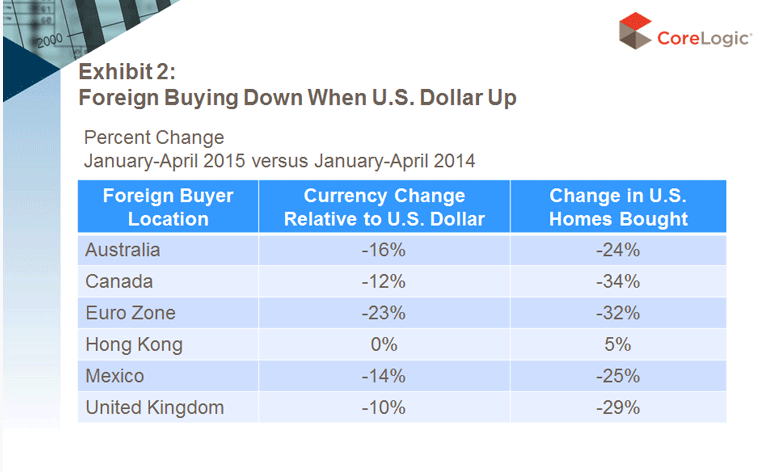 Notable exceptions to these large swings in foreign exchange values were the Chinese yuan and Hong Kong dollar, which have closely tracked the value of the U.S dollar.

Another cause behind the decline could be due to the fact that the markets where foreigners tend to buy have had strong home price appreciation in the last few years.

“Foreign buying could continue to decline, level off or increase in 2016 depending on the value of the U.S. dollar relative to most foreign currencies, but the uncertainties surrounding how the Eurozone will resolve the debt crisis in Greece has made it more difficult to project foreign currency movements,” said Nothaft.