May home prices nationwide, including distressed sales, increased by 6.3% in May 2015 compared with May 2014, according to the home price report from CoreLogic (CLGX).

This change represents 39 months of consecutive year-over-year increases in home prices nationally. On a month-over-month basis, home prices nationwide, including distressed sales, increased by 1.7% in May 2015 compared with April 2015.

“Mortgage rates on 30-year fixed-rate loans remained below 4% through May, helping to fuel home-purchase activity,” said Frank Nothaft, chief economist for CoreLogic. “Our homes-for-sale listing data shows that markets with high demand and limited supply, such as San Francisco, are recording double-digit appreciation rates over the past year.”

Including distressed sales, 33 states and the District of Columbia were at or within 10% of their peak prices in May 2015. 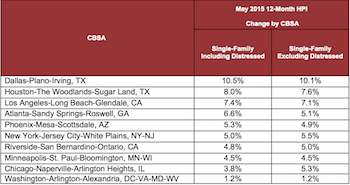 The CoreLogic HPI Forecast is a projection of home prices using the CoreLogic HPI and other economic variables. Values are derived from state-level forecasts by weighting indices according to the number of owner-occupied households for each state.

“The rate of home price appreciation ticked up in May with gains being fairly widely distributed across the country. Importantly, higher home prices over the past couple of years have spurred increases in new single-family construction,” said Anand Nallathambi, president and CEO of CoreLogic. “Sales of newly built homes during the first five months of 2015 were up 23% from a year ago, and as rising values build equity for homeowners, we expect to see more existing homes offered for sale in the coming year.”

Some highlights from the report include: