A leaked Treasury Department memo, first reported by InsideSources and since obtained by HousingWire, raises questions about whether the Treasury withheld key documents in a lawsuit brought by shareholders in Fannie Mae and Freddie Mac over the Treasury’s treatment of GSE investors.

Further, it raises questions among critics about whether Treasury had designs on the GSEs beyond its initially disclosed mandate.

The memo, dated Jan. 4, 2011, is a planning memo by then-undersecretary for domestic finance at Treasury, Jeffrey Goldstein, on the disposition of the GSEs.

The document was not provided in one of the dozen lawsuits in federal court over the Treasury’s controversial Third Amendment sweep of profits from the GSEs, despite a court order.

As one of a large number of working documents that bounced around between the housing working group, the memo is most notable because critics of the Treasury says it makes the argument that Treasury should disregard the federal Housing and Economic Recovery Act rules that circumscribe its duties in the conservatorship.

It describes the push to wind down the GSEs as “bank-centric,” and says the benefit would accrue to larger institutions that have “better access to funding and the capacity to hold fully diversified portfolios of residential mortgage risk.”

This, the memo warns, could lead to increased concentration in the banking sector and higher costs for borrowers served by smaller institutions.

The Treasury document also contradicts statements made a number of times by Treasury officials about the capital ratios that Fannie Mae and Freddie Mac would have to maintain. The document claims the percent is 3% to 4%, while statements since then have claimed 10%.

David Stevens, president and CEO of the Mortgage Bankers Association, was among the team at HUD at the time and worked closely with memo author Goldstein. He says that a wide range of potential options were debated, and this memo represents just one of many.

“This is back in January 2011, and, as with this memo, there were extensive discussions among everyone involved in the housing reform team, discussing entire sets of options for dealing with Fannie and Freddie over the long term,” Stevens told HousingWire.

“It gives a variety of options as we went forward. It’s just one of a whole variety of communications that took place over time from the time when we came into the administration in 2009. In that context, we debated, as bookends, everything from receivership and making them completely government-owned entities permanently, to the other extreme of completely getting out and removing the government guarantees…and everything in between.”

Investors Unite Executive Director Tim Pagliara, one of the leaders in the movement among shareholders fighting the Treasury’s sweep of GSE profits, disagrees, telling HousingWire that this was a smoking gun that shows Treasury never intended the conservatorship to be temporary, and, in his words, intentionally committed fraud.

“I think part of what’s going on is that people have some explaining to do, because they need to explain how they said they had to have a 10% capital requirement and their own people said it’s 3%-4%,” Pagliara said. “This isn’t some one-off; it was signed off on by seven people in Treasury including the general counsel’s office. When the private sector is saying that you need 2.5%-5% capitalization and they ridicule and attack you, then you see the inconsistency when Treasury itself is saying 3%-4%.

“We have said all along that any of these plans to get rid of the GSEs put the 30-year mortgage in jeopardy, and they said it doesn’t,” Pagliara said.

The memo does state that under the option of winding down the GSEs, the downside would be that it would “reduce prevalence of 30yr fixed rate mortgages and predominance of 3yr and 5yr hybrids” among other problems.

But he said the memo’s most damning content is that, he believes, it shows a clear violation of federal law in two primary areas.

“One, they knew that FHFA has the ability to end conservatorship and was supposed to be an independent agency. These are smart people. They understood what they were doing,” Pagliara says. “And two, they violated it with full understanding of what HERA was and was intended to do — to preserve and protect the housing system and put it on sound footing.”

Pagliara says that with the money Treasury has already taken out of the GSEs, it could have fully recapitalized Fannie and Freddie at the 3%-4% level the Treasury memo states is needed.

“The GSEs are far more profitable than anyone thought. That’s why they paid $10.2 billion in income tax last year – making them (together) the fourth-largest taxpayer behind Apple, Chevron and ExxonMobil,” he said. “You don’t destroy a profitable taxpaying industry. Why is the Treasury doing this? They have a lot of explaining to do. This is fraud.”

The legal implications in the disclosure of this memo are unclear. However, its exposure will probably raise questions about the existence of other undisclosed documents. Treasury simultaneously faces more than a dozen other lawsuits related to the profit sweep. 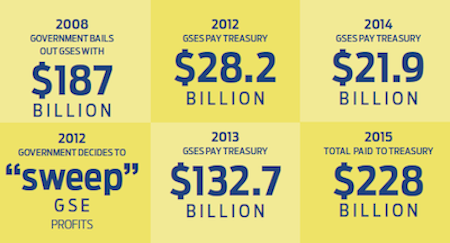 Last summer, a U.S. district judge threw out one of the lawsuits over the Treasury’s actions. That case is on appeal and the discovery of this memo raises troubling questions for Treasury.

“It does seem peculiar that Treasury did not provide this in the Lamberth case. It raises the question of whether, or what, other documents were not disclosed, and why,” says prolific Graham, Fisher & Co. analyst Josh Rosner. “Second, it suggests that they fully appreciated what HERA required and chose to circumvent the spirit, if not the letter, of law.

“When the white paper came out a few weeks later, there was no discussion of recap and reform, which seems peculiar since the document suggests there had been discussions on the subject,” Rosner told HousingWire.

Rosner said that had the white paper considered how to reform the GSEs, it would have been apparent that three “fixes” (eliminating the portfolio, which HERA does; increasing capital requirements, which the regulator has the authority to do; and implementing independent pricing of g-fees through some mechanism) would have taken reform 80%-90% of the way there.

“The fact that they didn’t make it into the discussions makes you wonder what other forces were at work,” Rosner said.

A spokesperson for Treasury, asked about the memo, provided the following statement:

“The flawed GSE business model, which allowed private shareholders to reap substantial profits from an implicit government guarantee at the taxpayers’ expense, was and is unsustainable. This has been the Administration’s consistent position, set out in the white paper and the President’s housing principles.

“Both recapitalization of the GSEs and draws against the existing Treasury backstop would come at taxpayers’ expense. We continue to believe that the only way to responsibly end conservatorship of the GSEs is through comprehensive housing finance reform legislation.”

Pressure is building on the question of why the government is being so secretive about all matters related to the government’s takeover and profit sweep of the GSEs.

The government responded to the latest shareholder lawsuit by listing 231 documents as off limits in the case. It cited “presidential privilege” in 45 of the documents — emails, draft memos and news releases.

Gretchen Morgensen, business columnist at The New York Times, spoke about this secrecy at the Society of Professional Journalist’s 2015 Page One Awards banquet in May:

“After I wrote about this unusual assertion of presidential privilege, the DOJ went further. It asked the judge to put under seal additional lists of documents that the government will withhold because of various privilege claims. In short, the DOJ is asking that its privilege assertions be privileged.

“I’m not a court reporter, but this is a first for me. And the lawyers who are litigating the case for the Fannie and Freddie shareholders say they’ve never seen anything like it either.

“For the government’s part, it has said that these documents, which date back as far as 2008, must be kept under wraps because they may roil the markets. That is completely absurd.”

The current chairman of the Senate Judiciary Committee — Sen. Charles Grassley, R-Iowa — has begun asking the DOJ for more disclosures about the Third Amendment sweep and for any documents being withheld in the Fairholme litigation.

Maybe their answer to him will settle the ultimate question: If all the actions in taking Fannie and Freddie into conservatorship and the Third Amendment sweep were right, moral, legal and proper — why the cloak of secrecy?

From the leaked Treasury memo:

After becoming adequately capitalized during the transition, the GSEs would exit conservatorship as private companies (Treasury converting its preferred into common equity to be sold to the public over time (under legal review); the GSE’s existing common shareholders being substantially diluted). The companies to guarantee a large share of mortgages, with PMI companies and homeowners taking the first loss risk as they have done traditionally.

This is essentially the path laid out under HERA and the Paulson Treasury when the GSEs were put into conservatorship in September 2008. This would no trequire legislation, but is subject to decisions made by FHFA as conservator in consultation with Treasury.

Dodd-Frank strengthens this option through the ability to designate the GSEs as SIFIs, and therebysubject them to more rigorous prudential standards and Fed supervision. GSEs/successor entities would maintain higher capital requirements and investment restrictions as envisioned in Transition.

Key criticisms of this system (which are partially mitigated through provisions in Dodd-Frank) :

Creates another set of private financial firms that are too big to fail.

Does not represent fundamental reform and does not “end GSEs.” Replicates the pre-crisis system of “heads I win/tails you lose” mentality of private shareholders.

Inadequate taxpayer protections and abuse of the perception of government support.

After GSEs reach private market pricing standards, they would be allowed to recapitalize until sufficient earning are retained to exit conservatorship (subject to FHFA). Cut in dividend or conversion of preferred into common would facilitate process (under legal review).

FHA-only option: Wind down of the GSEs

The GSEs’new business would be gradually limited by FHFA so that eventually they no longer guaranteed mortgages. In the absence of large mortgage guarantors, private securitization, covered bonds and bank balance sheets would support mortgage financing.

As in the first option, FHA would become the only provider of explicit government supported mortgage guarantees. FHA would be limited to targeted segments of the population, so that market share in normal times would be less than 10%.

The bank-centric mode reduces distortion in the allocation of credit and preference for housing. However, this model benefits larger institutions that have better access to funding and the capacity to hold fully diversified portfolios of residential mortgage risk.

This could lead to increased concentration in the banking sector and higher costs for borrowers served by smaller institutions.

Many  countries rely more heavily on their banking systems to provide mortgage credit, but often still have other strong forms of government involvement and support.

T ocounteract the tendency for banks to become larger, we would have to effectively applyDodd-Frank provisions, including SIFI surcharge, increased prudential regulation, concentration limits, etc., to limit taxpayerl osses in future housing crises.

FHLBs would be an even more important source of funding, which would require greater FHLB reform to reduce subsidy and the risk that the FHLBs become the next FNM/FRE.