Foreclosure filings — default notices, scheduled auctions and bank repossessions — were reported on 126,868 U.S. properties in May 2015, up 1% from the previous month and up 16% from a year ago to a 19-month high, according to the latest report from RealtyTrac.

The U.S. foreclosure rate in May was one in every 1,041 housing units with a foreclosure filing.

The increase in May was driven primarily by a jump in bank repossessions, which at 44,892 were down 1% from the previous month but up 58% from a year ago, and a 5% year-over-year increase in scheduled foreclosure auctions.

REOs increased on a year-over-year basis for the third consecutive month, and scheduled foreclosure auctions have increased on a year-over-year basis in four of the last eight months. May REOs were 56% below the peak of 102,134 REOs in September 2013 but still nearly twice the average monthly number of 23,119 in 2005 and 2006 before the housing bubble burst in August 2006. (Also see special methodology note on REO data collection below.)

“Even though national foreclosures increased a tad and REOs in California jumped we saw an expected settling in the Los Angeles metro numbers,” said Mark Hughes, chief operating officer with First Team Real Estate, covering the Southern California market. “As we settle back into more stable markets we will see some areas up and some down in foreclosure starts but overall we are settling back towards pre-boom distress percentages as a part of the overall market.  There’s still more inventory to clean up but all indicators are these are the final and in some cases the toughest distressed properties to move through the system.  A drop in distressed inventory adds even more upward pressure on pricing as inventory still lags behind good buyer interest across the region.” 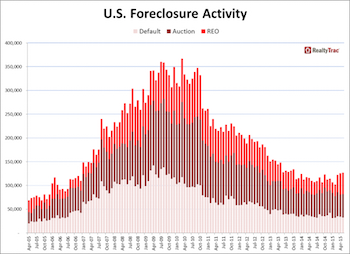 “As available housing inventory begins to increase, we are noticing slight increases in foreclosure activity across Ohio — particularly, in Columbus for homes priced under $200,000, which appears to be driven by Home Equity Lines of Credit maturity loans, as well as an aging population of homeowners not understanding opportunities available to them from increased area prices,” said Michael Mahon, president at HER Realtors, covering the Cincinnati, Dayton and Columbus markets in Ohio. “As income has not kept up with growing medical costs and credit expenses, many of these same homeowners are now in negative cash flow and equity situations. These homeowners should reach out to a neighborhood real estate or mortgage professional immediately to find out what options are available to them.”

A total of 51,414 U.S. properties started the foreclosure process for the first time in May 2015, down 1% from the previous month but up 4% from a year ago after four consecutive months of year-over-year decreases. Despite the increase, U.S. foreclosure starts are still below pre-crisis levels from 2005 and 2006 when they averaged 52,279 a month before the housing price bubble burst in August 2006.

Driven by a 63% annual increase in REOs, overall foreclosure activity in Florida increased 4% from the previous month and was up 7% from a year ago in May, and the state’s foreclosure rate ranked No. 1 for the month with one in every 409 housing units with a foreclosure filing.

“The increase in foreclosure activity in the Seattle area doesn’t concern me at this time,” said Matthew Gardner, Chief Economist at Windermere Real Estate, covering the Seattle market. “Given the growth in home values in our region, I believe that it’s fairly safe to assume that this increase is primarily a function of banks starting foreclosure proceedings after having delayed taking action for some time. I would not be surprised to see the annual rate continue to remain elevated for a while as we get through the pipeline.”